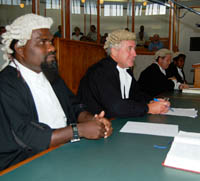 Permanent Secretary for Justice and Legal Affairs says the country cannot afford a separate scheme to improve terms and conditions for Government lawyers in this current economic situation.

This was due to dissatisfaction with the Government’s delay in addressing their claims on conditions of service.

But Fred Me’esa told SIBC News an expert they hired to conduct a survey of the lawyers in 2012 says the current economic situation in the country cannot afford it.

Me’esa also said they are still working on it.

“We are still working on it because we made a sort of survey in 2012 to look into the situation but the report by the expert that we hired conduct a survey on the lawyers recommended that the current economic situation of the country cannot afford any separate scheme for the Government lawyers. And because of that we do not say that we ignore it. We are still working on it,” he said.