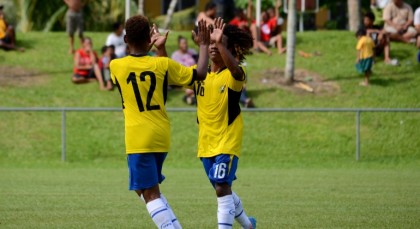 Solomon Islands players congratulate each other after. Photo credit: OFC.

Solomon Islands begins its OFC U-17 Championship campaign on a convincing 10- 1 goals against Tonga.

In the opening game, Tonga seized their chance at the first attempt to open scoring through Soakai Vea in the 14th minute.

This goal rattled the Solomon Islands side.

It took none other than the Captain Junior Hou to score the equaliser, five minutes after Tonga’s goal.

Solomon Islands ended the first half 3-1 after Larry Zama and Richard Raramo scored respectively in the 20th and 31st minutes.

A superb penalty save by goalkeeper Malafu kept the Tongan hopes alive for the second half.

Solomon Islands kept the pressure on the Tongan’s defence during the second half.

The Solomon Islands side scored seven more goals. Larry Zama was responsible for three of those, putting him in the running for the top scorer’s race.

Despite the 10-1 result, head coach Jacob Moli remains unsatisfied about the first minutes of the game.

Match Day 3 see the action travel to Apia, Samoa for Group A. 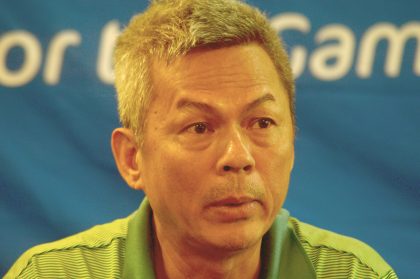 SOLOMON ISLANDS TO PARTICIPATE IN ALL O.F.C COMPETITIONS

Barnabas Anga. Photo credit: SIBC. Solomon Islands will participate in all seven of the Oceania Football Confederation's (OFC) sanctioned competitions. This was announced by the ... Read More

The Tahiti team. Photo credit: OFC. The battle at the top of the table in Group B continued in the OFC U-17 Championship on Match ... Read More