Secretary to Cabinet (STC) Mr. James Remobatu of the Office of the Prime Minister & Cabinet welcomed Permanent Secretaries to a one day dialogue and discussion Friday last week at the Honiara Hotel regarding the ongoing work status of current proposed Legislative Bills within each respective government ministries. 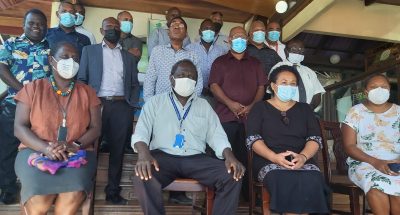 STC Mr. Remobatu in his welcome remarks highlighted the importance and purpose of the dialogue was to provide an avenue for Permanent Secretaries to consult and update each other on the updates and work in progress of various respective Legislative Bills and secondly in that dialogue process identify any constraints that needs to be addressed moving forward.

The Secretary to Cabinet said the meeting was organized by the Policy Implementation Monitoring & Evaluation Unit (PIMEU) a department tasked in monitoring government Policy under the Office of the Prime minister & Cabinet on the various stages reached in the preparation and respective status of over 50 Legislative Bills under different government ministries that need to be brought before the current Parliament.

He also acknowledged various factors like the COVID19 outbreak which continues and resulted in restrictive finance affecting key legislative consultations to bring the Proposed Bills to the final drafting stages ready for Parliament.

Apart from Permanent Secretaries, Deputy Secretaries and government Officials of each respective ministries were also in attendance.

An outcome document is being produced which will forge a way forward in determining a realistic timeframe inclusive of the Policy cycle and Legislative Bills to be completed and a decision on which Bills will be tabled in Parliament in its July sitting.