SI Records 1667 Arrivals during the Second Quarter of 2022

The National Statistics Office has recorded a total of 1,667 international arrivals in the second quarter of this year.

Government Statistician Douglas Kimi confirmed there was a total of 1,667 in the second quarter, an increase of 59.7 percent compared to the previous quarter.

Returning residents made up 76.6 percent of arrivals for the second quarter of 2022. 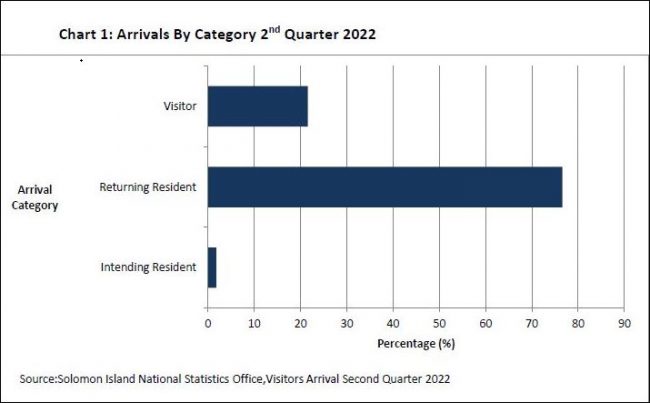 This was followed by Visitors with 21.6 percent of arrivals and the remaining 1.8 percent were Intending residents.

“Visitor arrivals for the second quarter increased by 30.9% to 360 visitors, compared to the first quarter 2022 figure of 275 visitors.

“There was also an increase of 103.4% in visitor arrivals compared to the same quarter in 2021,” Mr Kimi added.

Arrivals by country of residence for the second quarter 2022 showed that Australia recorded the largest group of visitors amongst other country visitors to the Solomon Islands at 45.8 percent.

Mr Kimi said although there were 165 Australians in the second quarter of 2022, this reflected a decrease of 6.3 percent compared to the first quarter of 2022 figure of 176.

The next largest group of visitors were from other Asia at 13.9 percent followed by Japan at 13.1 percent, China at 10.8 percent, United States of America at 6.9 percent, other countries at 3.3 percent, New Zealand at 3.1 percent, Fiji at 1.7 percent, other Pacific and other Europe at 0.6 percent respectively and PNG  at 0.3 percent. 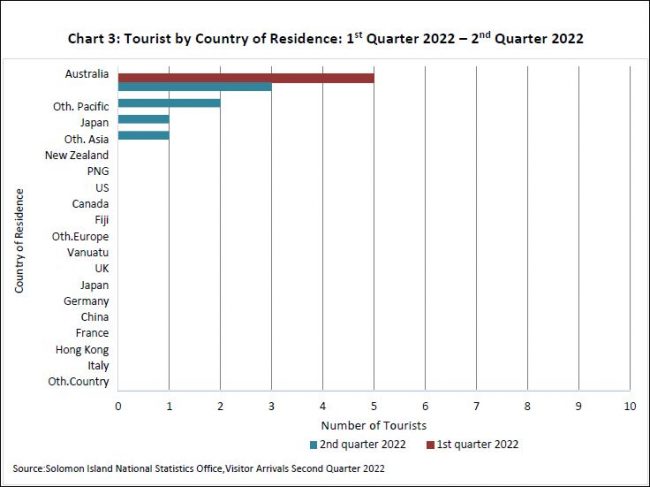 Meanwhile visitor arrivals by month showed that April recorded the highest number of arrivals in the second quarter of 2022 with 166 visitors.

This was followed by the month of May with a total of 99 visitors and June the least, with 95 visitors. 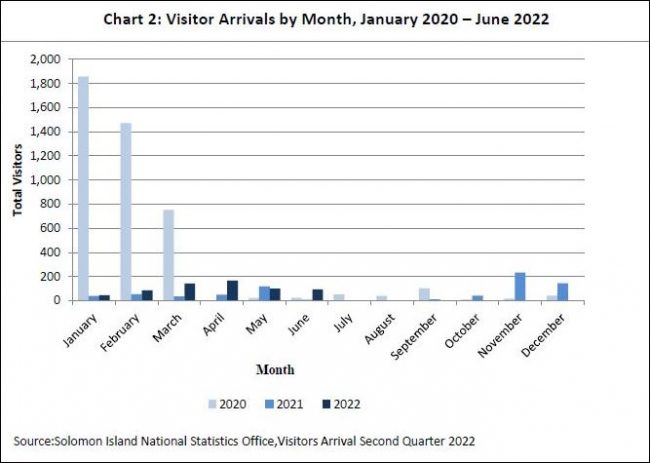 A significant decline in international arrivals was recorded since restrictions were imposed on International flights by the Solomon Islands Government towards the end of March 2020, as part of the State of Public Emergency (SOPE) response towards preventing Solomon Island residents and citizens from the COVID-19 pandemic.

The SOPE has now been lifted and from July1, 2022, international flights have slowly resumed.

International arrivals expected to increase after lifting of SOPE

The National Statistics Office expects a surge in the country’s international arrivals after the lifting of the State of Public Emergency by the Government on ... Read More