In Sports, the Solomon Islands National Football team will take on the All Whites in a do-or-die match this evening in their final group encounter at the Sir John Guise Stadium for the 2016 OFC Nations Cup in Port Moresby.

Knowing that their hope now hangs on a very thin thread after going down to Fiji a goal to nil last Tuesday.

Supporters and fans have come up with a number of views, some stating that the local boys can do it against New Zealand’s football giants, the All Whites.

They said that New Zealand’s mental and physical strength should not be regarded as an excuse for a country that worshiped football on its shores.

Supporters from both the sidelines and at home expressed their faith that the local boys can do miracle against the All Whites this evening.

Officers of the Ministry in the uniforms. Photo credit: GCU. The Ministry of Fisheries and Marine Resources' Monitoring, Compliance and Surveillance Department has taken delivery ... Read More 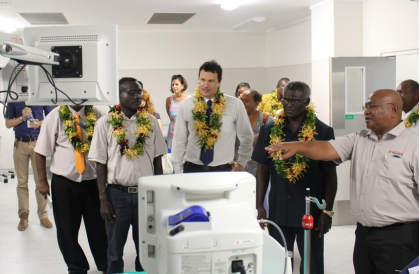 NEWER POSTDIRECT YOUR COMPLAINTS TO US: JUANITA MATANGA
OLDER POSTSOLOMONS HAS HIGHEST RATE OF CHILDREN SMOKERS