This visit builds on from earlier interactions Prime Minister Sogavare had with the US including the visit by White House National Security Council Indo-Pacific coordinator Kurt Campbell the Foreign Minister’s engagements with Secretary of State Anthony Blinken’s announcement of the US earlier this year.

A statement from the Prime Minister’s Press Secretariat said discussions during the meeting centred around the ongoing SI-US bilateral cooperation. 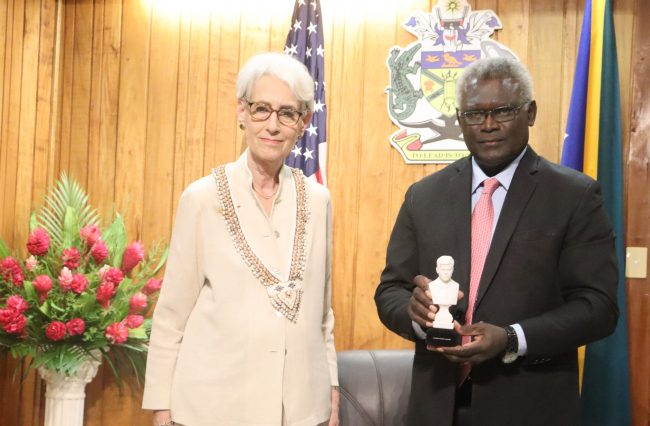 On US intent to reopen its Embassy in Honiara since the office was closed in 1993, Prime Minister Sogavare notes the progress made with the establishment of US Embassy in Honiara after 29 years, a response to SIG’s call for a more meaningful engagement with the US.

The Prime Minister also welcomed the appointment of a Charge de Affairs in Honiara to oversee operations and the bilateral relations in the interim until a substantive Head of Mission is appointed.

“A permanent US presence in the Solomon Islands will strengthen relations between the United States and Solomon Islands, and augurs well for the bilateral partnership going forward,” the PM acknowledged.

Mr Sogavare expressed the country’s hope to see an Ambassador installed as the Head of Mission, in order to fully engage with the government on all development issues.

The $25 million SCALE programme currently focused on Malaita province is especially to promote and fund projects on land management of agriculture and forest lands, increasing economic benefits by promoting community based forest enterprises or alternative livelihood and strengthening linkages between communities and public sector stakeholders.

Appreciating the program, the Prime Minister expressed the need to diversify SCALE support, and increase projects nationally by expanding to other Provinces in the near future.

At the beginning of this year, MCC and the Government signed the MCC-SI THP, formalizing a partnership that aims to alleviate poverty and encourage sustainable development. The MCC-SI THP will address constraints through the Accessing Land for Tourism Investment Facilitation (ALTIF) Project and the Forest Value Enhancement Project.

Prime Minister Sogavare welcomed the progress made with the MCC Threshold Programme roll out, since its signing in January this year adding, Solomon Islands would like to see diversification in support rendered to other critical areas of development such as infrastructure and energy projects to drive economic activities and  productivity.

“Solomon Islands is keen to receive formal feedback from the US Government on the proposal and have the desire to commence discussion on a Partnership Framework for Development Cooperation. The Framework is well intended and would serve to effectively manage and provide oversight to growing US/SI partnership and collaboration.

Discussed also during the meeting was the Peace Corps Program in the country.

In 2019, almost 20 years after departing Solomon Islands, the Peace Corps announced it would re-establish operations in the country.

Both countries agree, negotiations on the draft Peace Corps Agreement continue and hope SI-US finalize the document for signing this year.

Prime Minister Sogavare reaffirms that his Government will work closely with the Peace Corps Office to conclude negotiations on the draft Peace Corps Agreement this year.

In terms of UXO clearance and removal, the US has provided more than $6.2 million since 1993 to remove explosive hazards and build local capacity.  The US, working in partnership with Australia and nongovernmental organizations, has trained the Royal Solomon Islands Police Force (RSIPF) in explosive ordnance disposal (EOD) techniques.  Assistance has also developed Solomon Islands’ capacity to locate and track remaining UXO contamination.

Prime Minister Sogavare conveyed sincere appreciation to the US Government for supporting the MPNSC’s request and prioritizing the war legacy issue.

“Solomon Islands places enormous importance on UXO clearance/removal. The presence of UXO can impede development efforts, and compromise safety and security of communities and the public.”

The Government is also thankful to the US for its COVID 19 vaccine support to the country.

He thanked and appreciated US’s assistance and support in providing Pfizer vaccines, which has enabled the vaccination roll-out throughout the country.

The US is fast becoming a popular market for Pacific Islands kava products. Fiji in particular has taken full advantage of this opportunity. In 2020 it was reported, Fiji’s made 15 million in revenue from its US market.

Solomon Islands would like to see its kava products enter the US market. Therefore, the Government welcomes any support that the US can render to enable market access for our kava products.

The PM will officially respond to the invitation.