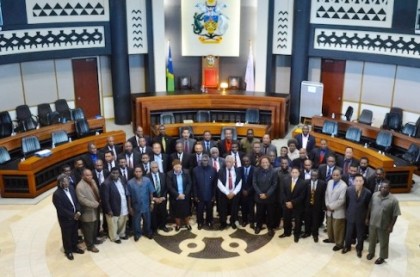 Members of the 10th Parliament in the chamber with the Speaker of Parliament, Ajilon Nasiu (center). Photo credit: Parliament

Acting Governor General of Solomon Islands Ajilon Nasiu issued notice this morning of the election of a new Prime Minister to all Members of Parliament.

The election will be on Wednesday, November 15 at the chambers of the National Parliament at 9:30 a.m.

Nomination papers can be delivered to the Acting Governor General at Government House from today until 4 p.m. on Friday.

At the close of nominations, the Acting Governor General will submit a list specifying all nominated candidates and their respective nominators to each Member of Parliament prior to the election meeting.

According to the Government Communication Unit, all members are eligible for candidature and no member can be a candidate unless he or she is nominated by four other members. No member may nominate more than one candidate, and any candidate may withdraw his or her candidature at any time before the conclusion of the election.

INVEST MORE ON YOUTHS INSTEAD OF REARMAMENT: SINCW