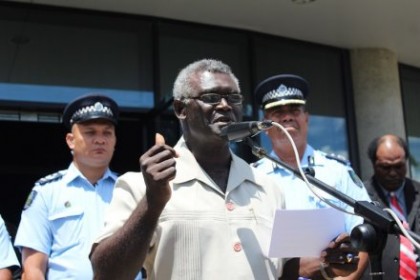 The Democratic Coalition for Change (DCC) Government has set itself 50 days to finalize its policies.

Prime Minister Manasseh Damukana Sogavare confirmed in a recent radio talk-back show on the National Broadcaster the political parties that make up DCC are combining their policies.

Asked as to when DCC will announce its priority areas, Prime Minister Sogavare said he will not preempt anything as yet as DCC is planning to have inputs from important sectors of the country’s economy added into their policies.

“So I would be jumping the gun right now if I start to talk about our thoughts on the strategic sectors. We would like to do it properly, in fact leading to the finalization of the policy we have set ourselves 50 days to do that. I have decided actually to carry out wide consultations with important sectors in the economy to have their inputs into our various policies, so if I didn’t answer the question now, it is very understandable because we have yet to put together our policy statements.”

SIBC News understands the Democratic Coalition for Change Government is made up of several other parties merging together with the Kadere Party, United Democratic Party and the People’s Alliance Party.