Solomon Islands has not been challenged only by the Covid-19 pandemic but also by the epidemic of lawlessness and criminal activities, domestic violence, rape of girls and women and disrespect for authority. 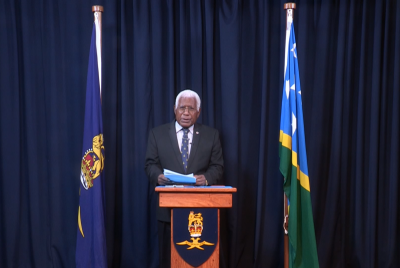 Governor General His Excellency, Sir David Vunagi made this statement during his New Year’s address to the nation.

“The barbaric killing of the 7-year-old girl at Kolombangara on 14 October 2021 was not only brutal but was uncultured and dehumanizing.

“Those who committed the offence must have been without feeling and were purely senseless,” he said.

“To avoid embarrassment and shame, girls try to terminate the fetus in the womb. But when they fail, the unwanted child is killed immediately after birth and disposed of either in the bush, river or rubbish bins.

“Infanticide is the crime that teenage girls commit in trying to conceal pregnancy.”

However, the Governor General said appropriate measures must be taken to restore dignity and respect for human life and law and order.

He said criminal activities in the communities show that moral and ethical values that were believed to be firmly embedded in Christian and cultural settings seem to have crumbled.

He said solutions must be sought by the communities to stand united and remain focus on how to eradicate evil and violence.

“The society must reweave its social and cultural fabric to create a culture that transforms men and boys to respect women, girls and children,” Sir Vunagi said.

The Governor General adds, unacceptable attitudes have filtered into schools and displayed by some students.

“Such students do not take school seriously and often skip classes.  They are often seen near market stalls along the road where copen, marijuana, kwaso, betel nut and cigarette rolls were exchanged.”

The Governor General calls on the Ministry of Education and Education authorities to review the disciplinary system in schools.

He said the discipline in schools need to create a culture that moulds students to live a better life and become good citizens of the nation.

MPs PROPOSED SALARIES YET TO BE FINALIZED SAYS VAGI

The Parliamentary Entitlements Commission (PEC) clarified that the increase to Members of Parliament Entitlements is just a proposal that is not finalized.       ... Read More

NEWER POSTConsideration should be given to make secondary and tertiary education affordable: GG
OLDER POSTPRC Provides Riot Equipment to RSIPF