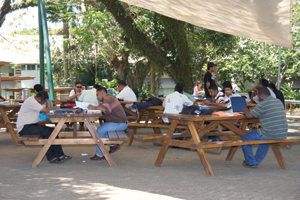 Five first-year students at the University of South Pacific in Suva, Fiji have been terminated after they trashed their motel room while they were drunk.

The students are on Government-sponsored scholarships and were accommodated at a motel in Suva while waiting for permanent accommodation.

The incident reportedly happened during the students first weekend in Suva.

A government officer with the Ministry of Education and Human Resources told Solomon Star the Ministry had already issued letters to the students parents to inform them of the termination.

The five students are expected to return next week.