Japan and SIBC signs Grant of more than $557,000 SBD for SIBC’s standby Generator

The Solomon Islands Broadcasting Corporation (SIBC) and the Embassy of Japan signed a grant contract today to fund a new standby generator for SIBC at the Japanese Embassy office in Honiara.
Funded under the Japan’s Grassroots Human Security Project, the “Project for Provision of Generator for SIBC” reaches more than $557,000 Solomon dollars.

Speaking during the signing, Japanese Acting Ambassador to Solomon Islands His Excellency Norimasa Yoshida said they are pleased to provide the assistance for SIBC.
“One of the priority areas of our assistance under the Grassroots and Human Security Scheme is supporting basic information services such as radio broadcast, which enables people to get information, especially in isolated rural areas where people are heavily dependent on the radio for information.
I believe the importance of information from radio broadcasts has just been proved under the Covid-19 pandemic,” he said.
He also acknowledged SIBC for its role in disseminating vital information during the Covid-19 pandemic.
“SIBC has been playing a significant role in delivering messages regarding the pandemic from the government to its agencies and to people throughout the country. Now, thanks to SIBC, everyone knows what should be done for prevention of the disease, and when and where to get vaccinated,” HE Yoshida says.
HE Yoshida congratulated SIBC on behalf of the people of Japan for the official approval of the project and wished them all the best in the project implementation.
“It is a great honor to contribute to the efforts of SIBC to bring information, education and entertainment to the people of Solomon Islands.
We believe this project will have positive impacts on how to improve communication and information services in Solomon Islands and strengthen further cordial relationships between Solomon Islands and Japan,” he said. 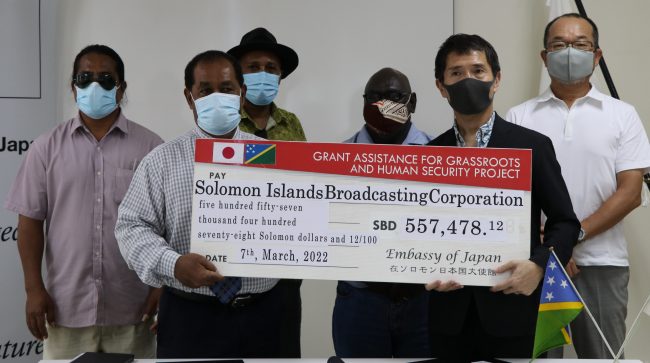 Meanwhile, SIBC Chief Executive Officer, Mr. Johnson Honimae expressed his gratitude to the Japanese government for the project approval.
“I wish to thank the government of Japan for accepting our proposal despite the fact that it is not located in the rural area. Our argument when requesting the assistance is that SIBC broadcasts to the whole country and especially to the grassroots in the rural areas.
This standby generator will ensure the uninterrupted broadcast by SIBC of news, information, education, and entertainment to our people. After 20 years, the current generator is not performing at its peak, so this new standby genset we are signing the documents for today will put an end to those interruptions,” he said.
Mr. Honimae also highlighted the important role the national broadcaster has played during the pandemic, which has brought to the forefront the important role of the national broadcaster.
“During this time of the Covid-19 pandemic, the entire population of Solomon Islands, especially the rural people, depended entirely on the SIBC for information on the virus. The Corporation broadcasts daily, seven days a week on FM, Medium Wave, and Short-Wave frequencies as well as a weekly TV bulletin on Solomon Telekom Television.
SIBC broadcasts through radio as well as online, the daily nation-wide COVID-19 updates by the Minister of Health and Medical Services; the fortnightly address to the Nation by the Prime Minister and the weekly Talkback Shows by the Covid-19 Oversight Committee,” the SIBC Chief Executive Officer said.
The assistance for the standby generator is not the first assistance that has been given by Japan to SIBC. Japan has funded the SIBC Henderson Transmitter, which is a Government-to-Government project with the People of Japan, and a Project for the Improvement of Radio Broadcasting Network for Administration of Disaster Prevention in 2011 under the Japan International Cooperation Agency (JICA).
This project was coordinated by SIBC with other Government agencies including the National Disaster Management Office, the MET Service, the National Referral Hospital and the Ministry of Environment. A volunteer from the JICA who was engaged in the project left in 2013.
By Eliza Kukutu and Ian Kaukui

The University of the South Pacific (USP) has been ranked in the Times Higher Education (THE) Impact Rankings for 2022. This is an incredible result ... Read More