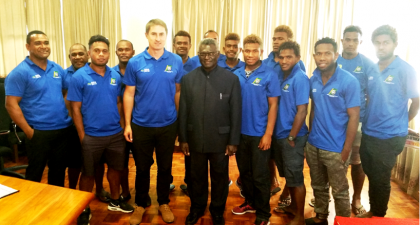 Prime Minister Sogavare joined others in offering words of encouragement during their daily morning devotion few hours before the team left.

Mr. Sogavare encouraged the team to be ‘good ambassadors’ of Solomon Islands by playing their utmost best during their mission.

In his reply, the Kurukuru Team Manager and Chaplain, Pastor Seru said, Kurukuru is ready to take on the challenge, adding advancing into the tournament’s Second Round is the initial goal.

Meanwhile, Kurukuru’s Brazilian Head Coach, Mr. Juliano Schmeling told SIBC News half an hour before their departure, the only threat in the group is Argentina but he adds the national side is confident.

“We are going to the world cup to play. Definitely, it will be a challenge but we need to be ready and we know the challenge as the top one from our group is Argentina for being the number five or six in the ranking Argentina has a big chance to qualify from our group, but we need to take this challenge and try to play well against them so the Solomon community should keep on supporting Kurukuru because we are going to make Solomon Islands proud.”

Kurukuru is pooled in Group E alongside Argentina, Kazakhstan and Costa Rica for the 2016 FIFA Futsal World Cup.