Prime Minister Hon. Manasseh Sogavare hailed the Fiji contingent of the Solomons International Assistance Force (SIAF) for going beyond their mandatory task of restoring law and order in the country.

PM Sogavare made the public commendation at Burns Creek last week at the opening of the Burns Creek clinic. 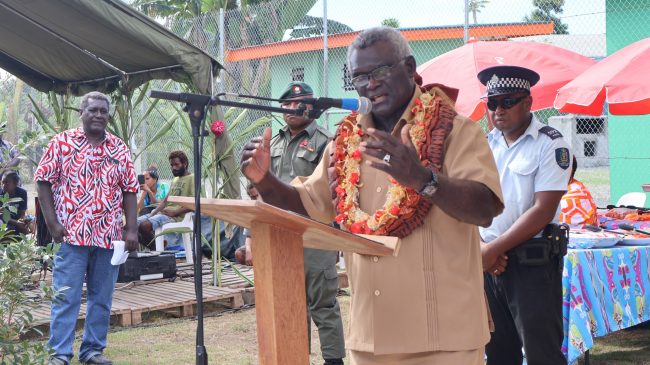 The Prime Minister delivering his keynote address at the occasion

The clinic was initially built by the East Honiara constituency and stopped around 2010 due to internal disagreements within the Burns Creek community.

The incomplete infrastructure lay idle for 11 years until the Fijian contingent of SIAF arrived in the country after the November 2021 riot. The Fijian contingent led by their active and down- to- earth leader and Commander Lieutenant Colonel Toanikeve, completed the clinic last week.

Friday last week Burns Creek was in a festive mood as all the men, women and children of Burns Creek flocked together to witness the opening of their clinic.

Prime Minister Manasseh Sogavare graced the occasion as the guest of honour much to the delight of the hosts.

When he took to the podium, PM Sogavare rightly hailed the Fijian Contingent of SIAF for going beyond the main task of restoring law and order. 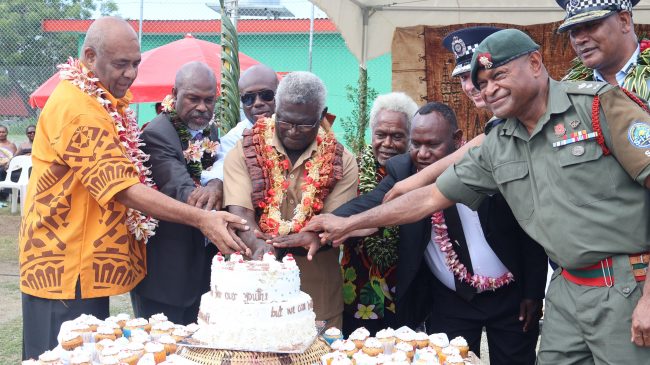 PM Sogavare flanked by leaders of the SIAF, Fijian Contingent and leaders of Burnscreek as they cut the cake to mark the opening of the new clinic

PM Sogavare said the Fijian contingent have “invested time and effort to rebuild trust within communities and people in their assigned areas of operations so that members of the community could enjoy longer term understanding, peace, and security which ultimately enhances stability in our country.”

He said that the Fijian Contingent have “focused on people, our people in Burns Creek community.”

The Prime Minister also underlined that besides the modern clinic that is available to the people of Burns Creek, the biggest gain is the strengthening of the community and the community spirit that have been developed as a result of working together. 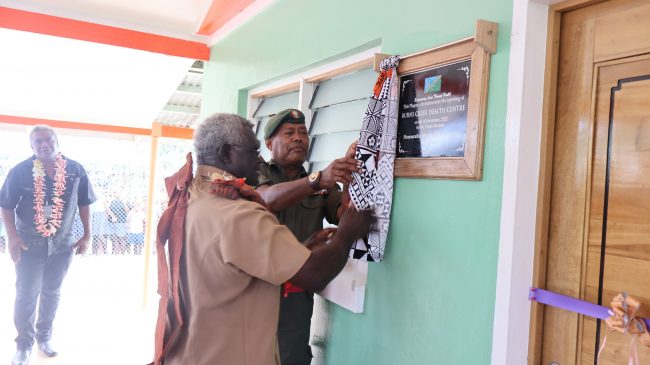 PM Sogavare further took time to praise the sponsors of the health clinic, adding that the government and people of Solomon Islands are thankful for availing resources which resulted in the completion of the clinic.

The Prime Minister also paid tribute to the chiefs, elders, men, women and children of Burns Creek for working together and for showing the qualities needed to build our country.

PM Sogavare further made a tribute to the Fijian Contingent of SIAF by commending the Contingent’s commander Lieutenant Colonel Toanikeve “…when you and your contingent leave our shores you will have left behind a legacy of empowerment, and people centered approaches that heal hurts, enhance forgiveness, and create trust even where one may think these are difficult.”

“I pay tribute to you and to the Commander of the Republic of Fiji Military Forces for this project that will contribute to the long-lasting peace and stability in Solomon Islands,” the Prime Minister added.

A batch of long-standing claims for frontline health workers Covid 19 allowances, has now been sent to the Ministry of Finance and Treasury for process ... Read More NEWER POSTMiss Solo Pageant set for next month as Our Telekom provides $150k support
OLDER POSTIncrease in COVID-19 cases in Honiara, 19 cases from 24 October to 2 November 2022