PM Sogavare Thanked US for Aligning Commitment to Forum 2050 Strategy

Prime Minister Manasseh Sogavare thanked the United States for its commitment to align its programs of support to the Pacific with the ‘Forum 2050 Strategy for the Blue Pacific Continent.

The US-Pacific Island Countries have reached a consensus on a declaration that is aligned with the 2050 strategy. 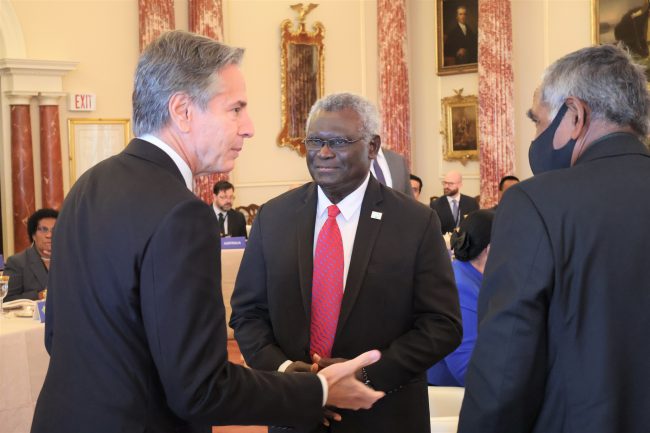 The declaration is a political expression that would guide partnership and cooperation between US and Pacific Islands going forward.

“It is in line with the Solomon Islands foreign policy of friends to all, enemies to none” which was echoed by Prime Minister Hon. Manasseh Sogavare at his general debate at the UNGA.

On Climate Change, one of the issues that Prime Minister Hon. Manasseh Sogavare passionately raised during his UNGA general debate and during the US-Pacific Leaders Summit, White House has announced more than US130 million dollars in new investments to support climate resilience and to build sustainable blue economies in the Pacific Islands; prepare for climate impacts on public health and food security, and to strengthen sustainable development; and also to build a better early warning capacity to predict, prepare for, and respond to climate hazards.

This adds up to a total of US810 million in expanded US’s programs to improve the lives of Pacific Islanders which President Joe Biden has announced during the first ever US-Pacific Summit.

This will build on approximately US375 million in climate programs US currently have in the region.

Prime Minister Sogavare thanked the United States for its commitment to align its programs of support to the Pacific with the ‘Forum 2050 Strategy for the Blue Pacific Continent’ – the blueprint for the region’s development vision approved by Forum Leaders in July 2022 and launched globally at the margins of the UNGA in New York.