Acting Prime Minister Honorable Bradley Tovosia on Friday received a courtesy call from the Non-Resident Ambassador of the Kingdom of Thailand to Solomon Islands, Her Excellency Busadee Santipitaks.

Her Excellency Santipitaks used the occasion of the courtesy call to inform the Acting Prime Minister, Hon Tovosia that she had presented her credentials to the Governor General, His Excellency, Sir David Vunagi, GCMG earlier on the day.

The Ambassador also conveyed her country’s condolences on the passing of the Queen of England and congratulated the accession of King Charles. Her mention of England’s monarchy is on the basis of Solomon Islands, a member of the Commonwealth. 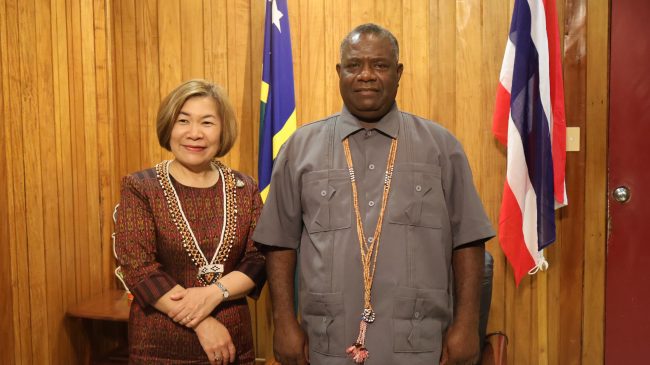 HE Santipitaks acknowledged the 36 years of bilateral relationship between Solomon Islands and the Kingdom of Thailand.

She highlighted that during the course of the 36 years of bilateral relationship, Thailand has provided support in the areas of fisheries, tourism, agriculture, health and so forth.

HE Santipitaks spoke highly of the education support Thailand offered through the Thailand International Agency which saw a lot of Solomon Islanders going to Thailand for both long term and short training. Her Excellency encouraged more Solomon Islanders to tap the opportunity.

In the health sector, Her Excellency highlighted Thailand’s support in the fight against malaria.

The Ambassador to Solomon Islands further acknowledged the Sustainable Development Goals (SDGs) which, like Solomon Islands, Thailand is also a party to it. She said through the ambit of the bilateral relationship, Thailand can share its experience with Solomon Islands in achieving the SDGs.

Her Excellency Santipitaks also spoke highly of the Prime Minister’s speech at the 77th session of the United Nations General Assembly (UNGA), pointing out that Thailand and Solomon Islands are nations of peace- loving people.

The Acting Prime Minister Honorable Bradley Tovosia in return acknowledged the condolence and congratulatory notes offered by Her Excellency on the passing of the Queen of England and the accession of King Charles.

Acting PM Tovosia assured Her Excellency that the government looks forward to forge more meaningful cooperation with the Kingdom of Thailand in areas of agriculture, health, tourism, fisheries and human resources.

Hon. Tovosia assured HE Santipitaks that the Ministry of Foreign Affairs and External Trade will be the focal point for further discussion on areas of common interest and pursuing the interests within the ambit of the bilateral relation between the two countries.