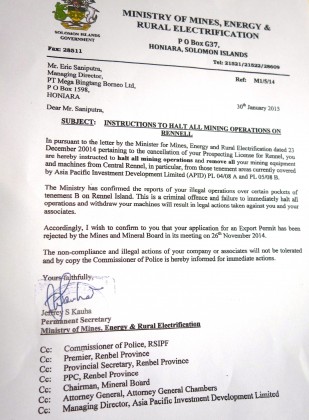 A copy of the notice issued to Bintang Borneo. Photo credit: SIBC.

The Government has cancelled PT Mega Bintang Borneo’s prospecting license and the mining company has been told to stop its operations in Central Rennell.

A statement from the Ministry of Mines, Energy and Rural Electrification this morning says Bintang Borneo was instructed to halt all mining operations and to remove all its mining equipment and machines from Central Rennell Island.

The Ministry says the company is restricted from mining in tenement areas covered under the Asia Pacific Investment Development’s prospecting license.

The Ministry says Bintang Borneo has been operating illegally on pockets of tenement B on Rennell Island.

It says legal action will be taken against Bintang Borneo if it fails to halt all its operations and withdraw its equipment from the said tenements, immediately.

The Ministry also said the Police Commissioner has been informed of the notice and non-compliance will result in arrests.

ANOTHER THREE POLITICAL PARTIES HAVE APPLIED TO REGISTER

GOV’T TO HAVE IN PLACE NEW LAND ADMINISTRATION SYSTEM