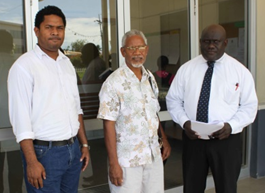 The High Court has adjourned hearing the country’s former Auditor General, challenging his termination to Wednesday this week.

The hearing was set for today, but judges were not available.

Former Auditor General Edward Ronia is seeking a judicial review on the decision the public service commission made on his termination.

Mr. Ronia was advised by the commission to leave his job late last year on the ground he was over the age of 55.