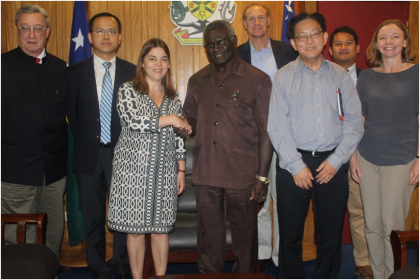 Solomon Islands has made considerable gains in terms of macroeconomic stability and strengthening institutions over the last few years.

Head of the International Monetary Fund (IMF) Team Ms. Patrizia Tumbarello made the statement during a recent visit to Solomon Islands.

The visit was to hold discussions on the 2016 Article four consultation and review of the Extended Credit Facility (ECF) program last month.

Ms. Tumbarello says, strong fiscal and external reserve buffers have been rebuilt, and have fostered the resilience of the economy.

Meanwhile, the Central Bank of Solomon Islands (CBSI) today says, the country’s economy is estimated to have grown by 3.2 percent in 2015.

It says, the stronger-than-anticipated performance of the forestry sector supported output while the reduced energy costs from lower oil prices had a positive impact on consumption and investment.

In 2016, GDP growth is expected to remain at around three percent while average inflation should stabilize at around two percent.

Current account deficit is projected to widen slightly to around 4 percent of GDP as exports of logs are expected to decline.

On the domestic front, the ongoing El Niño event will likely continue to weigh on agricultural production in the first part of 2016.

NEWER POSTCLEAN UP YOUR SURROUNDINGS: WHO
OLDER POSTCAUCUS CHAIR CALLS FOR MP INTERACTIONS