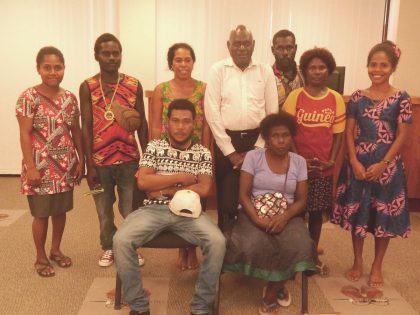 The survivors with PNG High Commissioner, and Staff.

The six people from Buka in Bougainville who were drifted at sea , survived and currently under the care of the Papua New Guinea High Commission Office in Honiara.

Drifted for ten days since February 16th the six people landed at an Island in the Ontong Java Atoll on the 25th.

One of the survivors, Mrs Agnes English said they were traveling to Cartrate from Buka Island when their engine ran into a mechanical problem and the boat sank.

Mrs English said when their boat sank they lost everything and left without water and food for 10 days.

She described their experience as very different and thank God for surviving that tragic incident.

“Many times we take God for granted, The experience in the open sea is very different, my faith quivered  a little but, ” she said.

“I was like where is this God?, I remained positive, even though I was scared, I never showed it.”

While thanking the families of Ontong Java Atolls for giving them accommodation before coming to Honiara, Mrs Buka emphasised  the need to stay together and encourage one another during such incidence.

“We kept on empowering each other , and we kept on praying, saying sorry to God ,” she said.

“It was like a common practice because we kept on praying, trusting in the lord that all will be fine.”