Solomon Airlines has kicked off 2023 with congratulations to pilot Lyndah Tito Owen, on her promotion  from Dash 8 First Officer to Captain of the national carrier’s largest domestic aircraft.

Captain Owen’s achievement was celebrated today at Honiara Airport with the official presentation of her  Captain’s epaulettes, and a water cannon salute to mark the occasion. 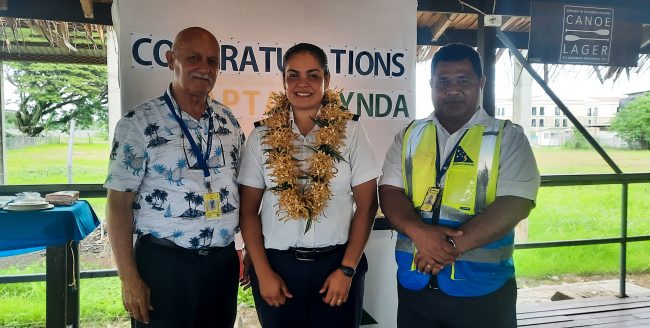 In 2019 she qualified to become a First Officer on the 36-seat De Havilland Dash-8 aircraft, which today  operates between Honiara and key destinations including Auki, Munda, Gizo, Santa Cruz and Kirakira.

Most recently she qualified and was promoted to Captain in command of the Dash 8.

Her first flight as a Dash 8 Captain in Command took place on Tuesday 3 January, on the Santa Cruz to Honiara route, operating with Captain Geoff Posala.

“We warmly congratulate Lyndah on her hard work and achievements in order to reach her command  position as a senior captain with Solomon Airlines,” said CEO Gus Kraus.

“We are tremendously proud of her, for her record of flight performance and for the example she has  set for other young women and men, who may aspire to a flying career,” he said.

“Her promotion with the ranks of Solomon Airlines is also pleasing as we have a commitment to  developing our people and our workforce in a way that generates employment opportunities within the  Solomon Islands,” he said.

In 2017 Captain Owen and First Officer Patricia Avosa made Solomon Islands aviation history when they  operated Solomon Airlines first flight under command of an all-female crew.

They flew a Twin Otter turbo-prop aircraft on some of the carrier’s busiest domestic services – the first  time in the country’s aviation history.

Solomon Airlines kicked off the program for their 60th Anniversary celebrations this week by staging a two-day Aviation Fair at the airline’s Henderson headquarters.  Peter ... Read More