Solomon Airlines will celebrate the airline’s 60th year next month with a program of festivities and celebrations and the introduction of a 60th Anniversary logo.

Chief Executive Officer (CEO) of Solomon Airlines Mr. Gus Kraus said the milestone year was especially significant after the most difficult period in the airline’s history.

“Solomon Airlines has survived many challenges in the past, but none so difficult as the past two years and the impact of the COVID-19 pandemic.

“As we celebrate 60 years of resilience, we also turn a page.

“Solomon Airlines will stay true to our mission – providing safe and reliable air services connecting our provinces, and focusing on the strategic role of the national carrier in the economic development of our country,” he said.

Solomon Airlines recently unveiled a 60th Anniversary logo with the tagline ‘Connecting the Hapi Isles’, honouring how Solomon Islands is known globally, and the logo will be in use for the next 12 months. 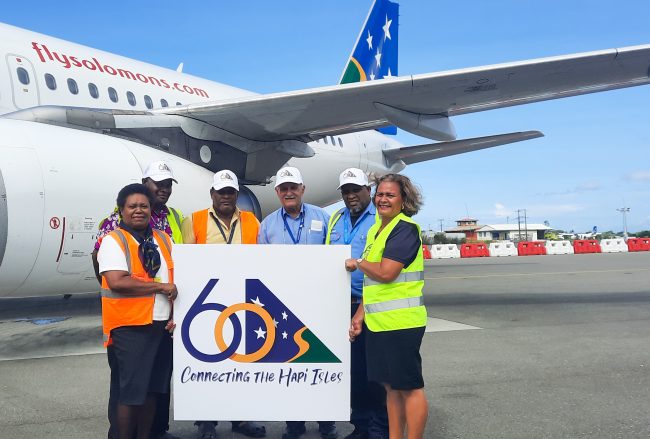 Celebrations planned next month include an ‘Aviation Week Fair’ to be hosted at Solomon Airlines Head Office grounds on 26th and 27th October.

The opening day on 26th October will be officially launched by Solomon Airlines CEO together with the Permanent Secretary for the Ministry of Communication and Aviation, Mr Moses Virivolomo.
Over two days, students from eight schools will participate, taking part in a 30-minute tour and talk.

The airline has again secured the naming rights of the ‘Solomon Airlines 60th Anniversary Peace Marathon’ which takes place this year on 29th October.

The Peace Marathon is a joint initiative between the Ministry of Culture & Tourism, Tourism Solomons, Travel Solomons and Solomon Airlines.  This year the running festival will comprise five events 2, 5, 10 thousand races, a 21.1 thousand Half-Marathon and a 42-kilometre Full Marathon.

That evening, Solomon Airlines will also host a 60th Anniversary cocktail event for VIP government and commercial representatives, corporate sponsors and aviation and tourism partners.  The evening’s program will include a keynote address and presentation, celebrating the airline’s legacy.

The history of Solomon Airlines can be traced back to 1962, when aviator Mr Laurie Crowley founded a small charter airline in Solomon Islands called Megapode Airways.

In 1968, Macair of Papua New Guinea acquired the company, and its name was changed to Solomon Island Airways (which many called SOLAIR). SOLAIR became the smallest international airline in the world.

In 1975, both Macair and Solomon Island Airways were taken over by Talair of Papua New Guinea.

The following year in 1976, the Solomon Islands Government acquired 49 percent of Solomon Island Airways shares and the right to buy the remaining 51 percent after 5 years.

In 1984, the Government of Solomon Islands decided to acquire all remaining shares to achieve 100% ownership of the airline.

The ownership transaction was completed in 1987 and in 1988 the airline’s name was changed to Solomon Airlines Ltd as it is known today.