The Governments of Solomon Islands and Japan on Sunday 7th August 2022, signed the Exchange of Notes for Japanese grant aid under the Social and Economic Program of Japan for an approximate 200 million Yen, which is equivalent to SBD10.9 million. 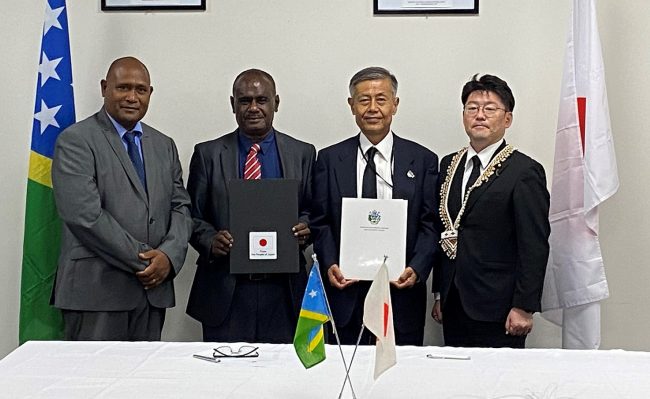 The fully equipped isolation wards will be built in four (4) provincial hospitals including the National Referral Hospital.

Minister Manele in response acknowledged the Government and people of Japan for their unwavering support to Solomon Islands and assured that this partnership will continue to harness and strengthen our friendship.

The event hosted at the Ministry of Foreign Affairs and External Trade was attended and witnessed by the visiting Japanese State Minister of Defence, Hon. Makoto ONIKI, the Minister of Health and Medical Services, Hon. Dr Culwick Togamana (MP), Senior Government Officials of both Governments and personnel from the visiting Japanese defence delegation.

A total of 20,000 Covid-19 Rapid Antigen Tests have been handed over to the Royal Solomon Islands Police Force (RSIPF) by the Chinese Police Liaison ... Read More

Leader of the opposition Mathew Wale commended the government's stance to halt repatriation flights from Fiji and other countries that have recorded an outbreak on ... Read More

NRH beefs up its COVID-19 Alert, Prevention and Preparedness plans

NEWER POSTSherman: US Presence in PICs and SI Is Not Sudden, it’s about what President Biden instructed us to do
OLDER POSTSogavare Welcomes Australia’s support of nearly SBD $100 Million for 2023 PG