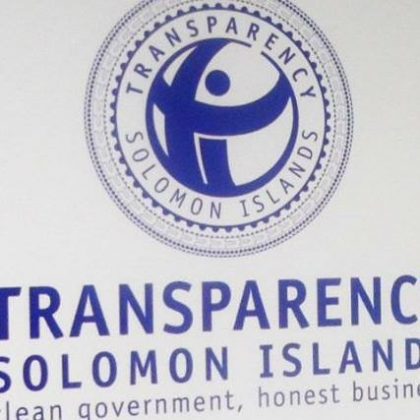 Political Corruption continues to affect the Ministry of Mines, Energy and Rural Electrification in the issuing of Licences.

Transparency Solomon Islands is concerned to learn today that the Ministry of Mines, Energy and Rural Electrification has just issued BINTAN two Prospecting Licences over Isabel and the island of San Jorge when it is the very company that is responsible for the environmental disaster and danger faced by the people of West Rennell.

It says the issuing of the Licence which was done on the 8th of March 2019 should show the people of Isabel and owners of these natural resources that there is something fishy going on.

It should be a concern to all of us voters that on the 7th of March the caretaker Prime Minister came out in public and declared his views on BINTAN and yet his Minister has issued the Prospecting Licence without any due diligence check on this company just a day later.

Better still why issue the Licence to a company we know how incapable and irresponsible it is when it comes to risk sharing of benefits, management and capacity to deal with any disaster, says TSI.

It says, the caretaker government should not be issuing any of these licences and yet the caretaker Minister has issued the Licence to BINTAN.

Transparency Solomon Islands noted that the prospecting licenses were issued on the 8th of March by the caretaker Minister for Mines.

As a result of what has now happened in Rennell, the care taker Prime Minister should be well aware that any licences issued to companies like BINTAN will have severe consequences for good investors pursuing ethical and sustainable development in this country.

Transparency Solomon Islands call on the Caretaker Prime Minister and the caretaker Minister of Mines to explain to the people of Isabel, and Solomon Islands the reasons for issuing these Licences to a company we know has failed to comply with the Mines and Minerals Regulation, provide data on a number of vital areas including the most important ones with regard to government revenue.