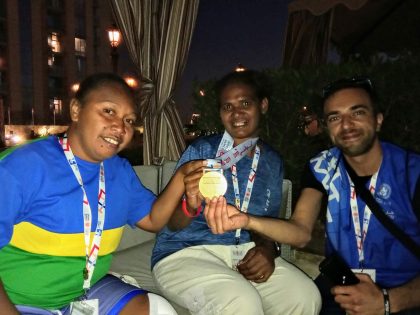 It is the first time the country has ever participated in this new World Games tournament.

June said, it is an unexpected big achievement for her.

She is happy to be part of the games because it helps her realise that someone like her has a games platform to showcase her potential in sports.

Head of the Delegation who is also the Founding Chair of Special Olympics Solomon Islands, Mrs Lisa Horiwapu said the gold medal at the world stage is history in the making.

Mrs. Horiwapu said, the three athletes participating in the games now become the first Special Olympians from Solomon Islands. That in itself is an achievement, let alone winning a medal.

Will the Solomon Islands get a mention? It is perhaps a fleeting connection at best, but there is one reason why US President Donald Trump ... Read More

The SINU official logo. Photo credit: SINU. Students at the Solomon Islands National University were told to go back this morning following the cancellation of ... Read More