Upgrade work on the Choiseul Bay Airfield is set to commence after a ground-breaking ceremony to mark the start of the work was held today at Taro.

The ceremony was attended by Prime Minister Manasseh Sogavare, Minister of Finance and Treasury Harry Kuma, Minister for Communications and Aviation Peter Agovaka Shanel, the High Commissioners of New Zealand and Australia, and members of the Choiseul Provincial Government.

The project is co-funded by the governments of Solomon Islands, New Zealand, and Australia, and is being implemented by Downer New Zealand. 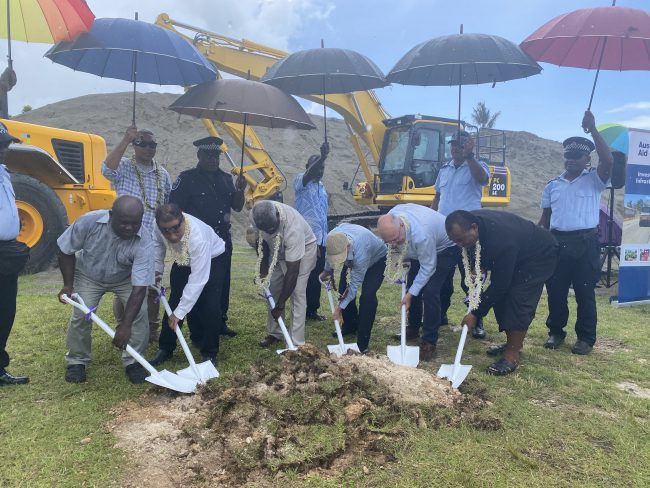 The project cost is SBD 250 million which will also see the improvement of the Seghe airfield in Western Province.

In his speech, Prime Minister Manasseh Sogavare acknowledged the partnership the country has with the two development partners.

“This is a testament to our ongoing cooperation and as part of the Pacific family, we appreciate the continuous assistance that has been provided by your two governments and we are looking forward to continuously strengthening and nurturing this relationship.

“I am looking forward to the completion of this project and the start of the construction of Seghe which I understand to be in September,” Prime Minister Manasseh Sogavare said.

Mr.  Sogavare also took the opportunity to thank the land-owning tribe that hosts the Taro township, which accommodates the Choiseul Bay Airfield.

“To the traditional landowners of this land upon which we stand today, I respect and appreciate the decision that you have made to allow this land to host this very important infrastructure that is serving our people in Choiseul province.”

“I thank and applaud you for your wisdom and vision,” he said. 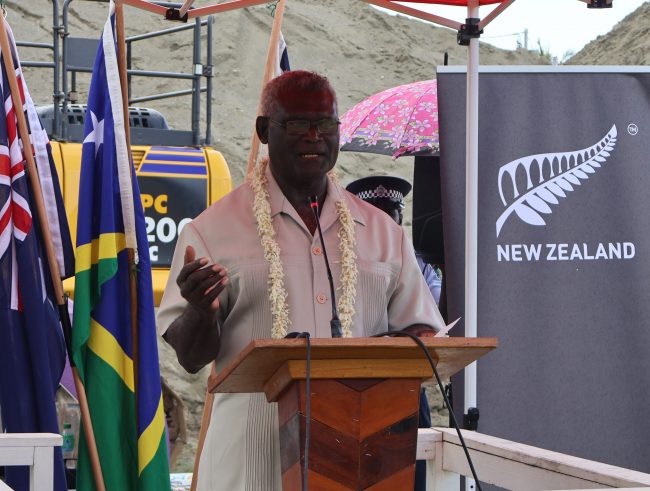 PM Sogavare making a point when he delivered his speech at the ground breaking ceremony of the Taro airfield upgrade project | Photo: Prime Minister’s Press Secretariat

The construction works will seal the entire airstrip and install ground lighting, to ensure that the Solomon Airlines Dash-8 will be able to land at the strip more reliably and safely.

The project will bring greater connectivity to Choiseul Province, including improving tourist access to the Western Solomon Islands.

Choiseul Province Premier Hon. Tongoua Tabe as he welcomed the delegation highlighted the importance of having such an infrastructure project.

“Imagine if we could increase the frequency of Dash-8 flights to twice or three times a week.”

“There can be no denying how this project will directly uplift our economy and our people’s wellbeing.”

Aviation plays a central role in the economic and social development of the Solomon Islands.

With that, New Zealand High Commissioner to the Solomon Islands His Excellency (H.E) Jonathan Schwass said New Zealand is really behind the development of the country’s aviation infrastructure.

He stated that they together with Australia have committed to working with the government of Solomon Islands to rebuild Seghe airport and Choiseul Bay Airfield.

“This is because Seghe Airport is the tourist gateway to Marovo Lagoon and Choiseul Bay because it’s a major hub in Solomon’s network and it services a large and important part of the country,” H.E Schwass said.

“The three-country partnership that is carrying out work at Choiseul and Seghe airfields is a great model for sharing the costs and risks of large infrastructure projects. New Zealand very much appreciates the collegial approach that we have seen from all parties working on the two airfield upgrades,” he said.

“I understand that Solomon Islanders will make up 80 percent of Downer’s workforce at its peak and I’m pleased to see that ten local people have already been employed.”

Meanwhile, Franklin Papabatu, leader of the Bakele tribe shares his excitement about the ground-breaking ceremony which marks the start of the construction of an important infrastructure project.

The occasion today is an important one and we are happy to have the presence of the Prime Minister with us.

It is a big thing for the province and we also expect it to serve the nation, the Bakele tribal leader Franklin Papabatu said.

DASH 8 TAKEN OUT OF SERVICE FOR MAINTENANCE

Solomon Airlines Logo. Photo credit: SIBC. The Solomon Airlines has advised, its Dash 8 aircraft has been taken out of service temporarily from today. A statement ... Read More

National flag carrier Solomon Airlines today announced that its largest domestic aircraft Dash 8 will be returning to the country despite costing the airline millions ... Read More