In a statement from Canada both Seru and Margaret expressed joy at their achievement saying this journey to Canada has been “God’s Will” and they look forward to calling Canada their new home. In the past 11 months a total of 14 persons from Solomon Islands have received their Canadian residency under the CITREC program.

“This partnership with Canada has permitted us to seek employment under temporary employment and then apply for Permanent residency in this magnificent country Canada as part of the permanent resident nomination program. We are so honoured and privileged to be part of the workforce in boosting this country’s economy. And we look forward to the opportunity to support our families back home through remittances in the future,” Margaret said. 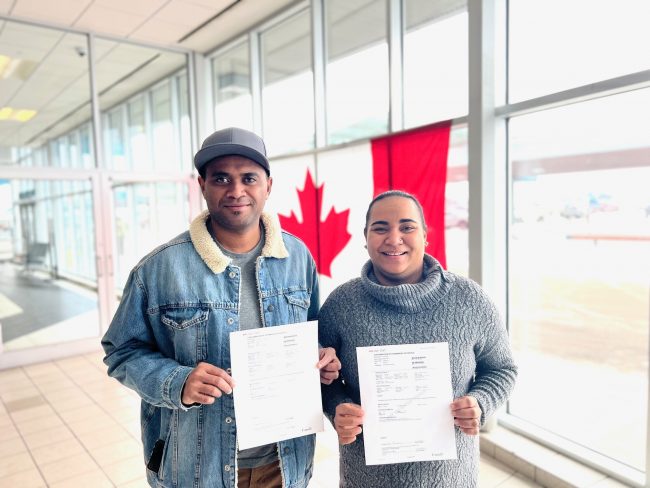 “Looking back in life it has been really a blessing and answers to many prayers. One could not express how grateful I was when I was informed of being selected for this opportunity. Thank you CITREC. I am thrilled and excited to call Canada my new home. However, let me say something today that Solomon Islands will always remain in my heart. It will always be my motherland” Margaret said from Canada.

Margaret’s husband Seru said that if it was not for labour mobility, he would still be struggling to find employment opportunities back home. The CITREC partnership has provided us a new opportunity and hope.

“I have in my effort to continue to strengthen our bi-lateral relations with the people and government of Canada and specially with Canada’s immigration division sent a letter in my capacity as representative of Solomon Islands and its people to Federal Immigration minister Sean Fraser to thank him and his staff at IRCC for their support to my people of the Solomon Islands,” Consular-General Dwivedi said.

CG Dwivedi said that during the time of pandemic Canada and Canadians stood together with Solomon Islanders in Canada to provide the much-needed support.

Last year in March in a milestone achievement for the Solomon Islands for the first time in the country’s history Eight Solomon Islands nationals were granted Canadian permanent residency. They were all in Canada under the immigration nomination program to work and call Canada their permanent home under the CITREC program.  Then a separate family of 4 were granted residency.  They were also in Canada under the nomination program under CITREC’s education and training program.

Canada’s partnership with the people of the Solomon Islands has paved the pathway to permanent residency allowing SI nationals to call Canada their new home.  Canada has proven to present one of the strongest partnerships through its labour mobility.

The Ministry of Foreign Affairs and External Trade (MFAET) remains steadfast in committing up to 5,000 workers into the Pacific Australia Labour Mobility (PALM) scheme ... Read More

A total of 84 people completed their Pre-Departure Briefing last week as the number of workers recruited under the Pacific Australia Labour Mobility (PALM) Scheme ... Read More