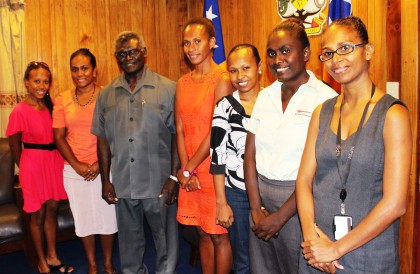 The Group presented the program and it’s new executive members during a courtesy call to the Prime Minister’s office.

Presenting the annual program, Secretary Alicia Kenilorea said, setting out the organisation structures, capacity building and strengthening communication strategies are among priorities for 2015.

Meanwhile, Prime Minister Manasseh Sogavare congratulates the new Executive and encourage them to continue preparing and empowering women for leadership roles at the national level.

Hon Sogavare says, the Office of the Prime Minister and Cabinet is the coordinating ministry for all other government ministries.

He says, by maintaining contact with the OPMC, the mission and the visions of the YWPG can be achieved – not debating issues in the media.

He said the Democratic Coalition for Change Government is looking at reviewing the Electoral laws of the country to ensure women are equal participants to men in decision-making at the national level.

The Democratic Coalition Government for Advancement (DCGA) has received a petition from a group that referred to themselves as Malaitans in Honiara this afternoon. Special ... Read More