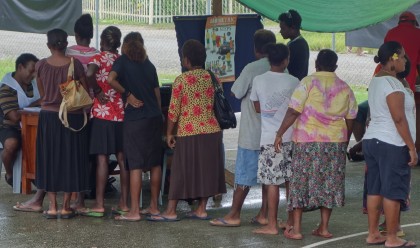 People lining up to get registered for West Honiara. Photo: SIBC.

In a statement, Mr Haununu said the Electoral Commission registered a voter population of 454-thousand and 67 this year, in comparison to an estimated population of 518-thousand and 338 voters during the Population and Housing Census in 2009.

He said the 2010 statistics is enormously unrealistic adding, it was fraud with multiple registrations and deceased voters that caused the registration numbers to be inflated.

According to Mr Haununu, the Commission adopted and used the Biometric Voter Registration to weed out any multiple registrations.

Meanwhile, the Chief Electoral Officer announced as of 28 April, the new Provisional List of Electors has 254-thousand registered voters.

Polycarp Haununu said the current listing does not include the 6 constituencies in Malaita and 3 constituencies in the Guadalcanal who are yet to complete their reconciliation receipt procedure, before their data can be put into the system.

Mr Haununu said estimated figures could be around 280-thousand to 290-thousand.

He adds, the raw figure is subjected to adjudication in the upcoming exhibition phase of the registration process to get the final figure to be used during Election Day.

The adjudication process will start on June 12 to August 9, 2014 before the voter list will be finalized and settled.

This involves checking the provision list, filing of claims Omission and Objection, and holding of a public inquiry into the claims filed.