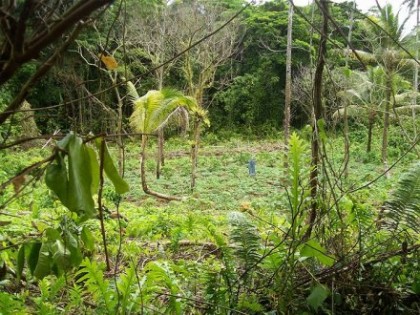 The Attorney General, James Apaniai has clarified the situation over the land on West Rennell given to mining company, Asia Pacific Investment Development (APID) and Bintan Company Ltd.

In a government statement, the Attorney General said any de-registration of the title over the land will only be made through a legal challenge.

It said the advice was tendered after the Government referred the matter to the Attorney General’s Chambers.

Earlier, a delegation comprising the Rennell Bellona Premier and his executive, Chairman of the West Rennell Council of Chiefs and landowners met with Prime Minister Hon Manasseh Sogavare to express their concerns about the validity of the land registration process through which APID and Bintan Company Limited obtained the title over the land.

In the meeting with Prime Minister Sogavare, the Rennell Bellona Premier Hon. Collin Tesuatai said his government will be challenging the whole land registration process in court as it believes it was ‘not properly done.’

He said the land title accorded to APID and Bintan Company Limited brings into question the relevance of the Land and Titles Act, especially as the re-registered plots had been allocated including the provincial headquarter site.

Meanwhile, the Rennell Bellona Premier said the continued operation of these companies on West Rennell will impact the province’s budget estimate as most other existing investors will be closing down operations.

Acknowledging the concerns raised by the Rennell Bellona delegation, Prime Minister Manasseh Sogavare said the matter was referred to the Attorney General’s Chambers after a meeting with relevant Cabinet Ministers last Sunday.

The Attorney General said everything that unfolded made the situation complicated as it does not only involve land issues but logging and mining operations as well.

He said records in the land acquisition file had shown the land was legally registered hence if the Rennell Bellona Provincial Government, West Rennell Council of Chiefs and landowners want the land title de-registered from the current holder, they have to challenge the acquisition process in court.

The Attorney General said as litigants they must provide evidence to prove either the land was registered by mistake or fraud.

He adds, there is nothing the government can do administratively to remove the land title from the current holder.

Mr Apaniai said the land title holder currently has the right to carry out logging on the land and only an interim injunction by the court can stop it.

For mining, the Attorney General said the Minister for Mines had issued a show-cause notice to the company, but it turned and filed a case against the Minister.

He said due to this impending court case, the Minister has yet to cancel the company’s mining license.