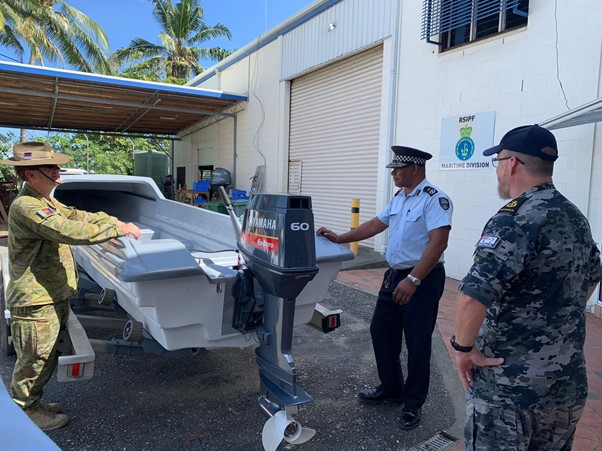 Lieutenant Colonel Bywater said, “I’m really pleased to be handing over these boats and motors to RSIPF Maritime Division to ensure their officers can safely navigate between islands.”

“The boats were made locally by Y.Sato Marine and are known as the ‘Weather Coast’ model because they’ve been made specifically to suit Solomon Islands’ unique conditions, with slightly deeper hulls,” Lieutenant Colonel Bywater said.

These boats and motors complement the 50 outboard motors and two aluminum longboats gifted to RSIPF Maritime Division under the Defence Cooperation Program earlier this year.

In addition to the handover, Commissioner Mangau toured the Maritime Division’s operations room, which Australia is upgrading under the Defence Cooperation Program. 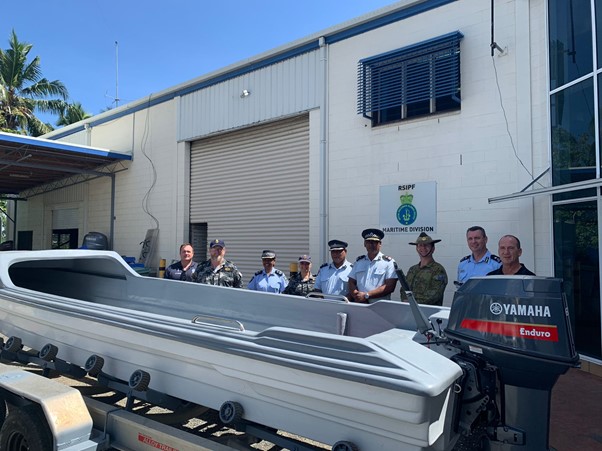 Representatives from the RSIPF, ADF, AFP and Y.Sato Marine stand behind one of the new Australian-gifted ray boats

Commissioner Mangau said this operations room upgrade is a great addition to the RSIPF’s capability and will complement the work AFP is undertaking to upgrade the operations room at Rove headquarters.

“We are pleased to have Australia assist us with this work which ultimately helps us respond faster and more efficiently in times of crisis,” Commissioner Mangau said.

Australia is proud to continue its long-standing partnership with RSIPF Maritime Division.

Police officers at Tulagi in Central Island Province have arrested and charged a 38-year-old mother on 29 December 2022 following the discovery of a dead ... Read More