CEMA progresses on amidst Covid-19

The Commodities Export Marketing Authority (CEMA) revitalization and recapitalization seven-year strategy is progressing on smoothly despite the negative impact of COVID- 19 community transmission. 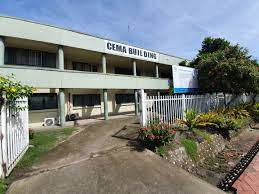 The seven years’ strategy started in 2021 and to progress to 2027 and all the work now are in Phase One of the implementation of the strategy.

A notable negative impact of COVID- 19 community transmission on CEMA is it delays the opening of Pakera, Buala, Tarakukure and Malu’u buying centers’. The rescheduled openings are now aimed for April- June of this year.

However, some achievements have been met, CEMA has now completed repair cost assessments of four major buying centers around the country.

With the cost assessment done, CEMA is now progressing on to contract builders and contractors to carry out repairs and maintenance work on these buying centers. These Centers should be up and running by April to July of this year.

Tasks done so far, a Memorandum of Understanding (MOU) has been signed between CEMA and Pakera Enterprises Limited for the five years lease for a buying center to be hosted at Pakera, Makira Ulawa Province.

Pakera contractors are already engaged through a signed contract to start the refurbishment and establishment of the Pakera buying center and work has since started in December 2021.

Site visits and assessments to Manekalaku buying center in Guadalcanal Province and Tingoa in Rennel Bellona is yet to be completed in the second quarter of this year, and costs of repair work to these buying centers will be factored into the 2022 Development Budget.

CEMA’s determination to establish a refinery has also taken a positive note as well with the concept and master plans of the Noro refinery being completed. It receives further boost with the purchase of a land in Noro purposely for the new buying center and refinery.

Also, the ground ceremony for the new buying center in Noro has been done away with in December 2021.

On the statutory front, the CEMA Cabinet Sub- Committee has completed consultations and presentations with CEMA board and management to amend the CEMA Act of 1984 and the cocoa and coconut regulations. An amendment to the Act will see the inclusion of add products in the schedule 1 of the Act.

Currently on- going, repairs and maintenance on all former CEMA warehouses in Honiara and the provincial buying centers. Upgrade to the cocoa and coconut laboratory for quality assurances is also in the pipeline for the first quarter of this year. Under the revitalization and capitalization strategy, CEMA is boosted with an investment of $77 million from government and the strategy will be implemented over a seven-year period in three phases.

The CEMA Cabinet Sub- committee is tasked to oversee the rollout of the strategy, and assessment to the strategy is done on monthly and quarterly basis.

CEMA is charged with the export of cocoa and copra being the mainstay of our economy, it also responsible for the overall management and coordination of the production of the commodities.

The Democratic Coalition Government for Advancement (DCGA) acknowledged that cocoa and copra has been the cornerstone of our economy, and the revitalization of CEMA is one of the main policy priorities of DCGA.

The Permanent Secretary of the Ministry of Communication and Aviation, Moses Virivolomo has clarified that airports can only be closed by the airport operator through ... Read More