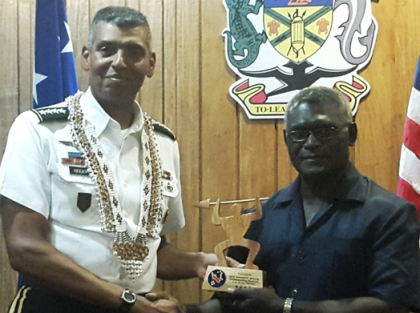 General Brooks presents his gift to Prime Minister Sogavare who gifted him with the Malaitan shell money necklace he is wearing. Photo credit: OPMC.

He said this project must be on and ready by the 75th Anniversary of the landing of the Allied Forces on Guadalcanal.

Mr Sogavare said he will ensure that it is successfully implemented and will probably require legislation to avail the land for the project, which will remind us of the price of peace paid by the Allied Forces.

He said the Bloody Ridge Project will be a major tourist attraction after its completion.

Bloody Ridge, proposed to be a US Memorial Park, is situated between the Honiara International Airport and Tenaru in East Honiara.

Meanwhile, General Brooks thanked the Solomon Islands Government for its help in recovering the remains of the Allied Force soldiers who fell in Solomon Islands during the 2nd World War and preserving the battle sites.

He said the battle sites are war memorials which attributes to the price of peace paid by the Allied Forces.

Prime Minister Sogavare and General Brooks also discussed significant roles played by the United States in ensuring world peace and security and reiterated the commitment of the two countries to this agenda.

Top of their discussion was the RAMSI draw-down and the importance of addressing the recommendations of the Solomon Islands Truth and Reconciliation Process.

They acknowledged that these issues have a bearing on the issue of peace and national security and ought to be dealt with strategically.

The Court of Arms. Photo credit: Solomon Islands Government. The Democratic Coalition for Change (DCC) Government through the Prime Minister's Office and the Ministry of ... Read More