Opposition Leader Matthew Wale has strongly objected the government’s continuous push for Extending the life of this Parliament from four to five years. 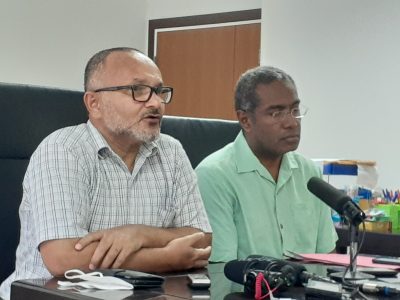 Speaking to journalists in a Press Conference yesterday, Mr Wale said extending the life of parliament is self-serving because there is no consultation with people – the electorate.

“So, we view this as a serious breach of trust with people, but it does not surprise us because this is the government that loses the trust of people in this country,” Wale said.

The MP for Aoke/Langalanga uttered these statements during a Press Conference with Members of the local media yesterday.

This comes as the government continues to push to amend the constitution— allowing for an additional year after 2023.

“They are having these meetings, I know, recently with the Solomon Islands Chamber of Commerce (SICCI) because the chamber issued a statement that the majority does not support it,” Wale said.

It was reported that the Cabinet had agreed to extend this Parliament until 2024 due to the Pacific Games in Honiara next year which would clash with the National General Elections.

A survey conducted online with 61 members of SICCI between January 13 and February 15, shows that 73% of participants strongly disagree with the current proposed extension of parliament.

The Opposition Leader said the government seems intent on pursuing this goal of extending the life of this house to five years.

“..and the fact that they did not want to carry out wide and broad consultation with the public on this matter is of greatest concern,” Wale reiterated.

He said that election cycles are different from any government policies.

The Leader of Opposition, Matthew Wale Opposition MP, Peter Kenilorea Junior organised a first-ever Press Conference yesterday. Both spoke against any extensions of the current house.