Solomon Airlines has confirmed plans to resume flight services to Lomlom airstrip in Temotu province via Kirakira in Makira-Ulawa province. A flight has been planned for this weekend.

Last month, the national flag carrier ceased all flights to Temotu’s provincial capital Lata due to the deteriorating condition of the runway. Flights to Lomlom were also affected due to no fuel supply available at Lomlom Airport. 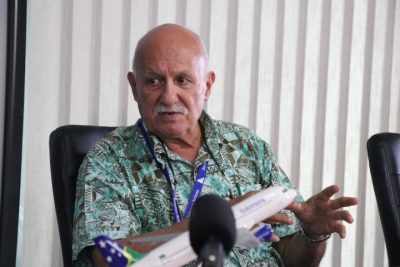 “The current issue that we have in Lata, is something that the Ministry of Civil Aviation is working with the Ministry of Infrastructure and Development to appoint a contractor to go and repair and rehabilitate,” Mr Kraus said.

He said the timeline is not certain at the moment but in order to keep airline services to the area, they plan a flight to Lomlom this weekend, via Kirakira direct to Lomlom and back to Honiara, “ he said.

The airlines note that fuel will be an issue with the flight service arrangement, but they are working at rectifying it.

“Our problem with that operation is the fueling is in Lata. So, we’re working on a plan with a potential contractor to get some fuel drums from Lata to Lomlom,” he said.

The airline recently suspended its flights to Lata airport due to deteriorating condition of its runways.

This has affected flights to Lomlom as there is no available fuel supply at the Lomlom airport. It has affected services to Temotu province as these two are the only airports serving the far eastern province of Solomon Islands.

Meanwhile, Mr. Kraus also confirms that the airline is working with the Ministry of Civil Aviation to repair minor fixes at the Taro airport before services there are resume.

He adds that Seghe airport is also being worked on but clearing bomb disposals have been an issue.

“Seghe is being worked on, we’re not sure if it will continue but Downer construction have been there and clearing the bomb disposals from WW2 is part of the problem.

“So, we know that they’re going to move to taro and try to work out between taro and Seghe, which one is more suitable to complete the project,” Mr Kraus said.