The Government has disclosed prices of houses at the Mamara Housing Project while refuting a recent media publication which reported that the price of houses at Mamara project ranges between $2million to a whopping $3million. 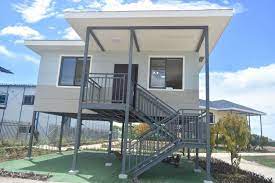 “There are three types of houses, type A, B and C. The type A house has three bedrooms including one self-contained master bedroom and this costs $927,675.

“For the type B house, it is also a three-bedroom house but with shared amenities. This costs $742, 140. The type C house is the 2-bedroom house which costs $556,606,” said Riley Mesepitu,  the Permanent Secretary of the Ministry of Commerce, Industries, Labour and Immigration.

Mr Mesepitu said the price of houses at the Mamara Tasivorongo Area as stated by print media recently is an exaggeration.

“There are three types of houses being built and their prices does not range between 2 to 3 million,” Mr. Mesepitu told journalists in a Press Conference yesterday.

He said compared to home finance and other real estate agencies, the cost of the houses is not that different.

Mesepitu further explained that the number of units each type of house is required, is built according to the Sale and Purchase Agreement.

SIBC News understands the total amount is being separated into percentages of 40%, 50% and 10%, and according to the Sale and Purchase agreement, the government is to pay the houses in phases.

Phase one which is 40% was paid last year. Mr. Mesepitu also confirmed during the press conference that Phase 2 which is 50% has just been released recently.

Meanwhile, the Permanent Secretary assured that the houses have been valued by government Ministries to ensure that their prices are fair.

However, Mr. Mesepitu said it was difficult to assess the real costing of the materials as majority of the materials used to build the houses are not regular materials like the ones commonly used in the country.

“These houses cannot be compared with the timber houses we have in the country because the materials from the frame to the posts are light steel. And, according to our technical people here, light steel, posts and materials are new here so it is difficult to get its exact costs,” he said. The Ministry of Infrastructure Development (MID) has engaged a Singaporean-based firm to design and supervise the construction of selected roads and wharves in the country. ... Read More