The Ministry of Environment Climate Change Disaster Management and Meteorology (MECDM) through the Climate Change Division with the King George Sixth Secondary (KGVI) School officially launched its Green Initiative program On the 10 August 2022. 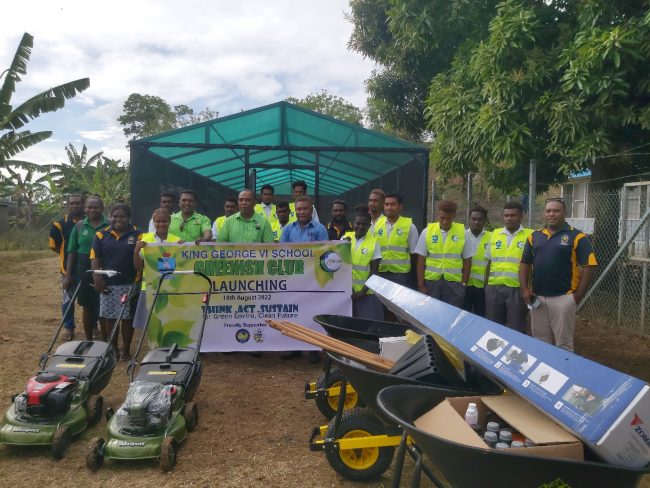 Delivering his remarks, Permanent Secretary Dr Melchior Mataki highlighted the importance of having such initiatives in the country, not just for climate change but for all environmental activities.

He also acknowledged KGVI for taking the lead to establish the Greenish Club.

The Greenish Club is led by students and supported by teachers. The Club has prepared its club logo, constructed a Greenhouse and developed a Green Guide for the school and the Greenish Club. The collaboration with the school was also part of MECDM’s contribution to preparations for the South Pacific Games given that KGVI will also accommodate athletes, and is also very close to the venue of the games.

The School Principal Dr Lionel Cliff Kakai responded by echoing the points made by Dr Mataki and acknowledged MECDM with appreciation for choosing the school as the pilot school for such initiatives in the country and welcomed any other support from the Ministry in line with the School’s Green Guide.

To mark the event Dr Mataki and Dr Kakai along with the school’s Greenish Club President cut the ribbon to signify the launching.

The launching ceremony also included the handing over of landscaping equipment to the School along with a Green house and planting of two palm trees to initiate the school’s tree planting programme.

The Green Initiative is funded by the Solomon Islands Government through the Climate Change Division development budget and is the first of its kind for schools in the country.