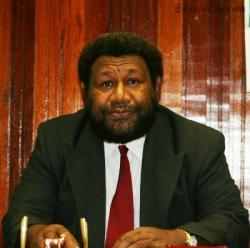 The Solomon Islands High Commissioner to Papua New Guinea has denied resigning from his job as claimed by a news item in the Island Sun newspaper on Friday.

The misleading news item by Island Sun quoted anonymous relatives of Mr Haomae claiming that he will return to the country on March 28 as a result of his resignation.

But Mr Haomae rejected the claim saying he has never resigned or submitted a letter of resignation as Solomon Islands High Commissioner to Papua New Guinea.

On coming to Solomon Islands, High Commissioner Haomae said his annual leave is now due and with the permission of the Permanent Secretary of the Ministry of Foreign Affairs and External Trade, he would take his holiday after concluding some important matters in Port Moresby.

With regards to the 2014 national general elections, Mr Haomae said he is a public servant and therefore decline to comment or be involved in politics.

The Permanent Secretary of Foreign Affairs and External Trade Beraki Jino on Friday has confirmed that his office has not received any formal notification from Mr Haomae on his alleged resignation.