The Tandai House of Chiefs wants all companies and business houses operating along the Honiara seafront to sign a Memorandum of Understanding (MOU) with them to qualify them to develop seafronts. 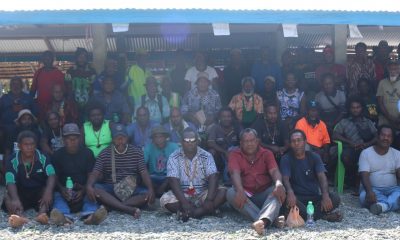 Tandai community leaders and chiefs during a recent meeting

Speaking to SIBC News, Tandai House of Chiefs General Secretary Daniel Donua says, although these companies are under some lease arrangements, the lease agreements were not recognised by the Tandai native people who are the customary owner of the Honiara foreshore.
“We have met over the weekend and agreed that the new process is for these businesses to sign an MOU with us to qualify them to develop the seafront,” Mr Donua says.
He says Honiara foreshores are customarily owned by the Tandai native people.
“These are tribal groups within Tandai, which are under the jurisdiction of Tandai House of Chiefs, as it accommodates these tribal groups.
The Tandai House of Chiefs representatives today met with the executive staff members of the Solomon Islands Ports Authority (SIPA) to pave a way forward for a Memorandum of Understanding with them on the same issue.
Mr Donua says the MOU will be between the Tandai House of Chiefs, on behalf of the Tandai native people, SIPA, Guadalcanal Provincial Government and National Government.
“This will be an understanding of partnership with the state-owned enterprise, so that SIPA can have some recognition for the native people on the use of seafronts,” he adds.
He says since 1975 there was no such recognition and this is a way forward for SIPA to have an understanding with the Tandai native people because they are the customary owners of the Honiara seafronts and foreshores.
Donua says SIPA has assured them to discuss this issue in their board meeting next month.
“We want every companies and business houses that operate within the Honiara seafront to comply with us on this MOU,” Donua reiterates.
SIBC understands that the national Government has also signed an MOU with Tandai house of Chiefs in regard to the Coral Sea Cable project.
Donua reminds the National Government, Honiara City Council and development partners that the Tandai native people are the host of the capital, Honiara.
The issue of foreshore has been an ongoing one for customary land owners.
The Guadalcanal people do not want to stop development but want things to be done in a proper way. Prime Minister Hon. Manasseh Sogavare during his weekly nationwide address. Business entities that were temporarily closed under the Emergency Powers (Covid-19) Regulations 2020 have been ... Read More