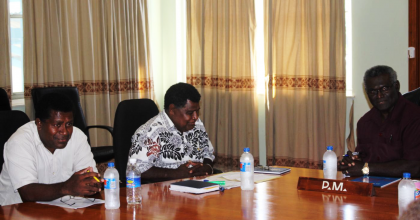 Guadalcanal Provincial Premier, Bartholomew Vavanga has said infrastructure delays have caused the fourth USP campus to be shifted from Doma to Honiara.

Premier Vavanga told SIBC News in a recent interview, donors of the project has a timeframe to commence the project, which was not met.

“What happened was that, you know, the donors who would like to build the university has a timeframe to do and because of some sort of delay in infrastructures like electricity and the time has come that, you know, if that cannot eventuate then they have to pull out the funds and divert the development to the King George area.”

SIBC News understands, it is proposed Doma will now be hosting a school of medicine which will later host the Faculty of Public Health.

MAN CALLED ON MALAITANS TO DO AWAY WITH LAND DISPUTES

A map of Malaita Province. Photo credit: www.commerce.gov.sb A concerned North Malaita man has called on Malaitans to do away with land disputes to allow ... Read More

PM LILO AND DELEGATION HAVE MET WITH NZ PACBIZ COUNCIL