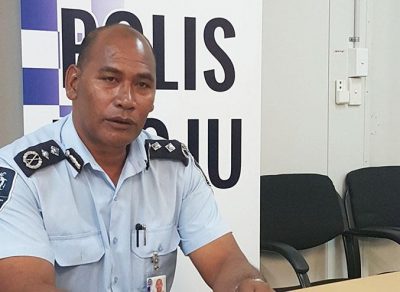 Investigation into the $300,000 missing money from police exhibit has been finalized according to the Royal Solomon Islands Police Force (RSIPF).
Commissioner Mostyn Mangau could not rule out if a foreigner was involved in the heist but said, police investigation was narrowed to only one person.
The Police Commissioner was grilled by local journalists in his weekly media conference today over the matter.
“Our investigation is finalized and a brief will be prepared by our team for the Office of the Director of Public Prosecution (DPP).
“The brief will be forwarded to the DPP when the case officer completes compiling the brief,” he said.
Commissioner Mangau said the DPP will vet the brief before progressing further into the case.
He said if the DPP sees the case is complete then they will proceed. However, if there are other evidence or some other things needed to sort out, then they will need to work on that.
The Police chief said this depends very much on the advice by the DPP.
“In the meantime, the investigation is on one person,” he said when asked by a reporter.
SIBC News understands that one person has been identified as the lead suspect on the missing money.
The $300,000 cash money was confiscated from the so-called Director of One-link Pacifica, a controversial Ponzi scheme that came under police investigations last year.
It went missing at the Rove Police Headquarter Exhibit room while under the care of an entrusted officer of the RSIPF. Police went public with it in February this year.
That money was kept under police custody as an exhibit for the case against the One Link director.

There is no shortage in currency banknotes: CBSI