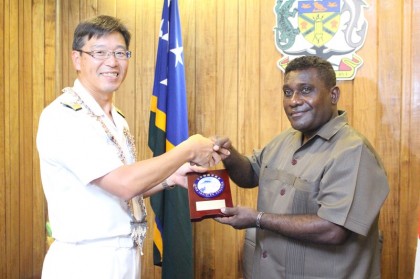 The Japan Maritime Self Defence Force (JMSDF) Training Squadron is visiting Honiara today as part of their 2014 annual training program.

The Japanese Embassy says, the squadron comprises 716 Personnel and three vessels under the command of Rear Admiral Yuasa Hideki.

It says the purposes of the program are to train newly commissioned JMSDF officers and promote friendship between the people of Solomon Islands and Japan.

During the visit Rear Mr Hideki will make a courtesy call on the Honiara City Mayor, office of the Prime Minister and visit the U.S Japanese Memorial to lay wreaths and pay respect to soldiers who perished during the second war in Solomon Islands.

The visit will conclude with a reception co-hosted by the Japan Maritime Self Defence Force and the Embassy of Japan in Solomon Islands with remarks from the Japanese government representative including the Solomon Islands Care Taker Deputy Prime Minister Manasseh Maelanga.

Solomon Islands is the eighth out of 13 countries visited by JMSDF.

The Squadron will leave the country 9 am on Saturday.

Meanwhile, care-taker Prime Minister Gordon Darcy Lilo has welcomed the Japanese Maritime Self Defence Force training squadron who are currently in Honiara on a one day bilateral visit.

Mr Lilo welcomed the squadron through their Rear Admiral Hideki Yuasa when they met at the Office of the Prime Minister and Cabinet this morning.

He said the JMSDF presence in the country will further strengthen existing relationship between Japan and Solomon Islands.

The care-taker Prime Minister also informed Mr Yuasa of Government’s support to Japan’s effort in their campaign to stabilizing security and global peace in the region.

In his response, Rear Admiral Yuasa said he was happy to be here in the Solomon Islands.

He also briefed the care taker Prime Minister on the purpose of the visit.

CLAY FORAU IN ISTANBUL FOR S.I.D.S TALKS WITH TURKEY