LOCAL HOTEL OWNER CALLS ON S.I.V.B TO RESIGN FROM TAVANIPUPU 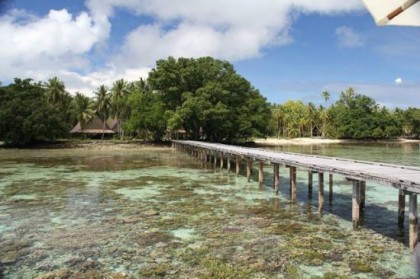 A hotel owner has called on the Solomon Islands Visitors Bureau CEO to resign from the Board of Directors of the Tavanipupu Island Resort Limited Company over what he describes as a “failed Tavanipupu investment”.

Charles Dausabea of Hotel Malaita made the call after learning of Josefa Tuamoto’s membership as a Board Director of the Tavanipupu Island Resort Limited company.

He said Tavanipupu is a failed investment made by the Solomon Islands National Provident Fund and resurrecting the investment would be inevitable for Mr. Tuamoto.

“This shows that he is taking sides. I am also a local operator and as such we need fairness from Mr. Tuamoto. You are paid to come to help all tourism operators in Solomon Islands. But this is a failed investment and you’ve allowed yourself to join this board, so all your time and effort will be focused on how to resurrect Tavanipupu. What about us who have borrowed money and build motels and hotels in the provinces? We see that his involvement in this will only draw his attention away from the whole intention of coming to help us local tourism operators.”

The Hotel Malaita owner has also questioned if the SIVB CEO was appointed to rescue Tavanipupu instead of helping the country’s tourism industry.

“Because now that is going to sit there and that place is losing money and must recover, his focus now will be on how to rescue that place. Is he paid and appointed to come and rescue Tavanipupu or to revive and rescue tourism in Solomon Islands, which I am part of. So with that, I am calling on him to resign from the post and focus instead on what the government has brought him to do.”

Meanwhile, asked what his response would be to Mr. Dausabea’s call, SIVB CEO Josefa Tuamoto says he will respond at a later date.