Manele calls on CHOGM support for SIS across Commonwealth 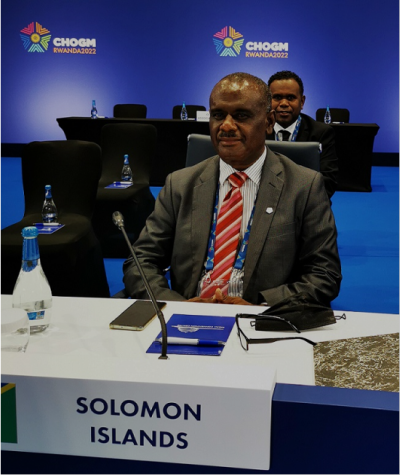 Honorable Manele made his remarks during the Commonwealth Heads of Government Meeting (CHOGM) in Kigali, Rwanda, on Friday 24 June.

At the meeting, Heads of Governments and Representatives discussed enhanced cooperation on three thematic issues including post-Covid-19 recovery, sustainable and inclusive development, and democracy, peace and governance.

In his remarks, Minister Manele commended the theme of the CHOGM 2022 on ‘Delivering a Common Future: Connecting, Innovating and Transforming,’ as it comes at a better time for the Commonwealth family to collectively address global challenges.

The Minister expressed the existential threat posed by the impact of Climate Change to Solomon Islands, resulting in economic loss, and the strain on limited financial resources to sustain economic development and growth.

The Minister acknowledged the role of the Commonwealth and its donor partners for their continued commitment to support climate change initiatives for small states.

He further commended the Commonwealth’s initiative in providing an enabling environment for youths to contribute to decision making mechanisms, as well as the promotion of youth-led initiatives, to positively contribute to the economic development of their communities.

The Commonwealth Heads of Government Meeting will culminate with a Retreat on 25 June 2022.