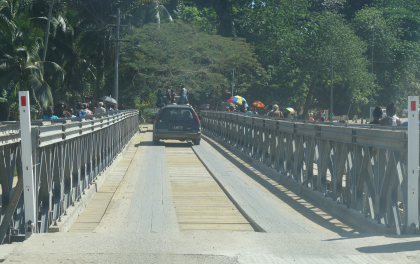 The new bridge was installed by Downer New Zealand Limited, with support from local firm Dalgro.

A statement from the New Zealand High Commission Office in Honiara said the bridge components arrived in Honiara on May 20, and pier construction, assembly and installation has been completed in over three weeks.

She said to have the bridge restored just over two months from the Guadalcanal flooding is a good result.

Solomon Islands Prime Minister Gordon Darcy Lilo has thanked New Zealand, saying the country is extremely grateful to the Government and people of New Zealand for their generous assistance in the time of great need.

He said the new bridge will support recovery efforts as the country’s economy rebounds from a severe shock.

Supporting transport infrastructure is a key pillar of the Solomon Islands-New Zealand Joint Commitment for Development.

It adds, along with the new Chinatown Bailey bridge, New Zealand has invested approximately 1-hundred and 86 million Solomon dollars in priority roads, bridges, runways, and wharf infrastructure across Solomon Islands over the last two years.

WORKSHOP TO ASSESS SOLS WORKFORCE ON IN HONIARA

The workshop, being held over the next three days, is by the Government, the World Bank and relevant stakeholders. Photo: World Bank Solomon Islands’ policies ... Read More