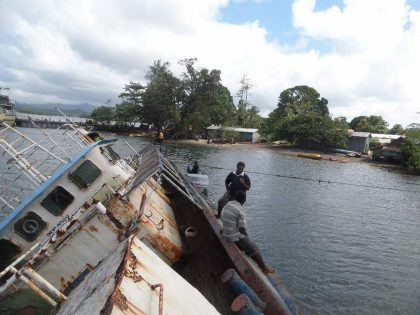 The oil spill from MV Takana at Namuga in Makria Ulawa Province will likely worsen tourism opportunity in the area, a concern raised by local operator, Alfred Murray.

The  spill has now covered an area of fifty meters since it sank last week.

MV Takana is owned by East Makira Constituency. The Ship had been berthing outside Namuga since late 2016 after it experienced some technical problems. The Ship finally sank last week,

Mr. Murray who runs a resort in Namunga said, the beautiful white sandy beach attraction was now brownish in colour.

He said the surrounding seas were also heavily polluted.

Mr. Murray said the oil spill from MV Takana added to the environment catastrophe which another ship belonging to an Australian Businessman has left on the same sea-front way back in 2001.

“There’s also another ship that beached up here since 2001, which was owned by an Australian during the peak of the ethnic tensions, it brought the same thing, oil spill everywhere,” he said.

“Most of us don’t use the sea like before because of the pollution, the sands are no longer white , it is mostly brownish.”

Meanwhile,  the Supervising Provincial Health Director John Harara told SIBC News this was the finding of a team that was sent down last weekend and conducted an assessment.

Mr Harara however ruled out rumors that the oil spill was causing diarrhea.

“According to the report from the team, the  diarrhea happened prior to the oil spill,” he said.

“I think this mainly had to deal with food preparation and how they are sold a the market over there.”

The tailings dam at the Gold Ridge mine. Photo credit: Pacific Scoop. The National Government has invited all eligible consultant services to send their submissions ... Read More

At the dump site prior to having the office building. Photo credit: www.honiaracitycouncil.com "Waste management is a good indicator of how a society is functioning" ... Read More