Low Oil Leakage from Sunken Vessel as No Fuel Onboard: Inspection Reveals No Pollution at this Stage

There is only light oil leakage from the sunken vessel MV J. HARMS that sank off a reef near Noro, Western Province on January 16th, 2023.

He said an inspection – assessment team is currently in Noro and sending information about the pollution caused by the ship. 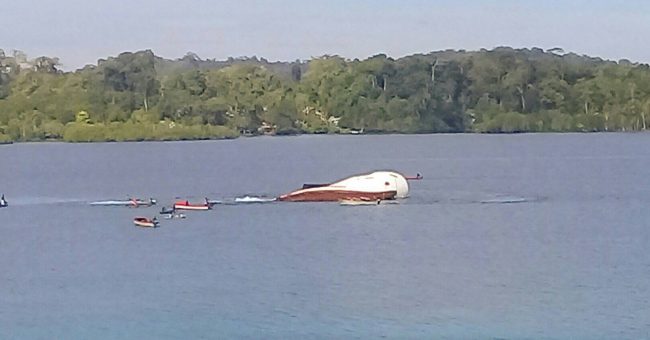 “An inspection-assessment team is still in Noro sending information about the pollution caused by MV J. HARMS.”

“There is light oil leaking from the sunken vessel coming to the surface by bubbles, probably oily substances from the engine room.”

“Inspection of surroundings and along the coast have not revealed pollution by oil,” the SIMA Director said.

Mr. Nervale also said that according to the ship owner, there was no fuel oil left on board during the incident as the vessel was not in operation, but there may be numerous empty drums left on board that needs to be confirmed.

Such incidents could have been avoided should the ship owners have adhered to the advice from the SIMA office and other relevant authorities.

Mr. Nervale said the sinking of MV J. HARMS is no exception.

“On behalf of SIMA and as Director I have to say that I am again extremely disappointed that we have to face another case of vessel sinking and pollution while we keep reminding ship owners of the responsibility of their vessel’s maintenance and operations.”

“I would like to just pass the message again that this case is the entire responsibility of the ship owner who must maintain and operate his vessel as required by applicable laws.”

“He is also responsible for the pollution and its consequences, to remove any pollutant presenting a danger to the environment from what is now a wreck and remove the wreck.”

“He has been notified of this on the first day we have been informed of the sinking of MV J. HARMS,” the SIMA Director said.

Attempts were made by SIBC to contact the ship owner but without any success.

SIBC also understands that the owner of the sunken Marine Vessel has failed to respond to a letter from the Maritime Authority as well as was reported in the local media.

PM DECIDED NOT TO ATTEND COP21 DUE TO PARLIAMENT