The People’s Alliance Party has signed a coalition agreement with political parties forming the Democratic Coalition for Change Government.

The agreement was signed in Honiara yesterday.

Secretary of the United Democratic Party, Andrew Muaki says the coalition agreement signed by the UDP, Kadere Party and the Peoples Alliance Party formalizes an existing informal arrangement since the DCC Government was formed.

He says the Peoples Alliance Party bound by its agreement with the Opposition Group until around January 9 this year.

Mr Muaki says the Party is now free to sign with the coalition and is now an equal member of the DCC Government.

He says the Coalition is in the process of submitting the Coalition Agreement with the Office of the Registrar of Political Parties. 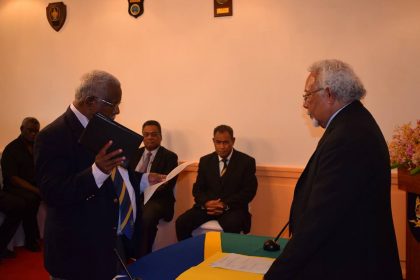 Houenipwela sworn in as Prime Minister