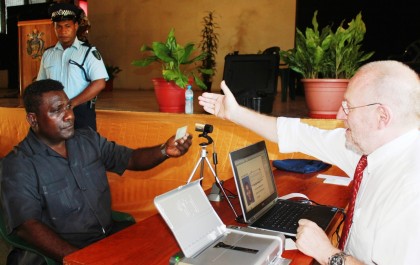 Today’s launch also saw the Prime Minister in a demonstration of the different stages of registration using the new biometric system.

During the demonstration, the Prime Minister gave his personal information, had his photo taken and gave his thumb prints using a special fingerprint laser machine.

A mock voters card – the size of an ATM card – bearing personal information and a photo was then produced.

Speaking at the BVR launch this morning, Prime Minister Lilo said an accurate Electoral Roll is the corner-stone of any election.

“For a successful election to be achieved an accurate electoral roll is the corner stone of any election. If the roll is not up-to-date it will highly likely that the election will be viewed with a great deal of suspicion and the election result may be brought into question through complaints as what we will always see in this country’s election petitions. But on the other hand an accurate and up-to-date roll ensures that everyone has the opportunity to be enrolled and to be able to have their say on the polling day and the result will properly reflect the will of the people, said the Prime Minister.

The Biometric Voter Registration System is a highly advanced biometric information system that allows enrolling and identifying of voters quickly and accurately.

It is hoped that the possibility of election fraud is minimized, and voters identification is accelerated, using biometric identifiers.