The premier of Makira-Ulawa Province Julian Maka’a applauded the initiative taken by the Matavale Women’s Association (MWA) to carry out a Disaster Preparedness and Response project in West Makira Constituency.

Two board members of MWA Yvonne Kwaomae and Ellen Paieke made a courtesy call on the premier last week at which time the project aims were explained to the premier.

The one year project is funded by UN-Women Peace and Humanitarian Fund in which women in the four wards of West Makira will be trained on soils improvement techniques, Financial Literacy to run ward businesses and to set up Disaster Management Committees in all the villages in West Makira. 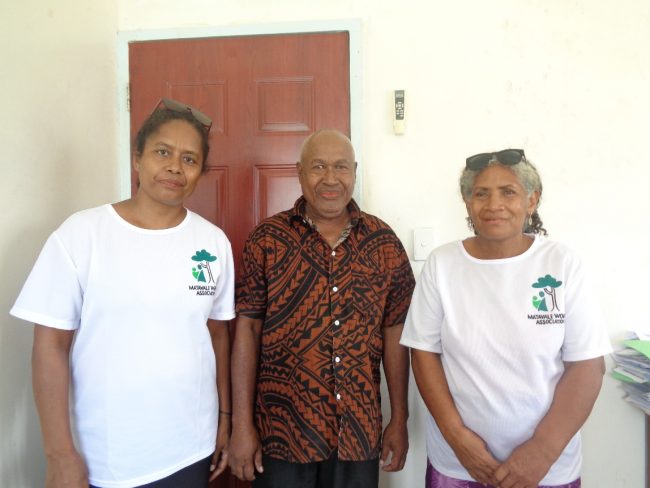 During the discussions, Premier Maka’a said the initiative was a welcoming one for the province.

“It was very welcome news and I congratulated the Association representatives for being the recipients of this fund. I thanked the Women for Peace and Humanitarian Fund for giving an opportunity to the MWA.

“This opportunity will help the recipients to not only learn new techniques in agriculture but also ensure there is enough food during disaster times as well as income generation for their families,” the Premier said.

Under the project Funding, MWA will be conducting 4 soils improvement techniques to enable women to grow a variety of crops and vegetables which they can feed their families with and sell to earn some income.

The project will also include two financial literacy training for women leaders of the four wards to enable them run businesses to generate income to be used to assist communities and families during times of disasters.

It has been experienced in the past that during disasters, families were left to fend for themselves on very low and poor food intake, poor housing, water shortages and various disaster related diseases and illnesses for months without any support.

The businesses, women organizations in West Makira are expected to generate income to be used to assist families in times of disasters.

MWA will also organize and establish Disaster Management Committees in all the villages to enable them to properly organize in times of disasters so that lives and properties are not lost unnecessarily because of poor planning and coordination.

Scoping work to roll out the project has taken place over the past two weeks and training on soil improvement is expected to start in September 2022.

MWA is thankful to the UN-Women Peace and Humanitarian Fund in funding the project to enable people in rural areas to prepare and respond to disasters when they occur.