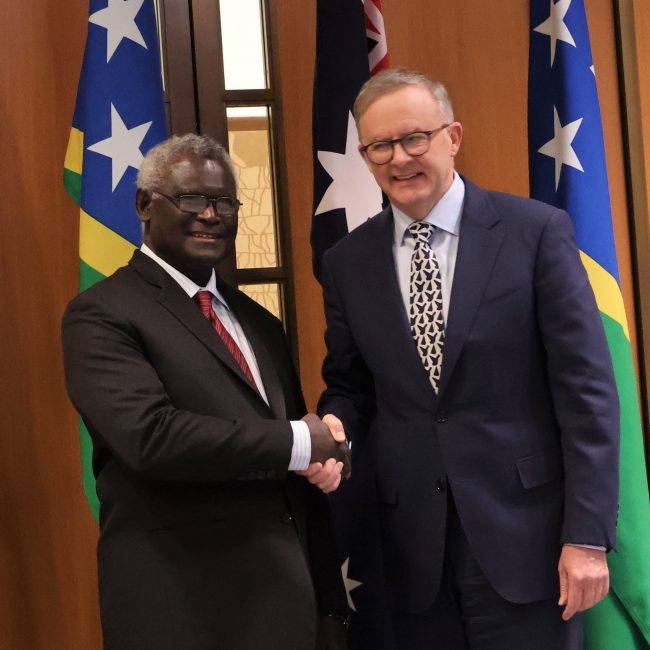 He committed support to work with the Pacific family of Forum nations national vision of development underpinned by Solomon Islands Foreign policy of ‘Friends to All and Enemies to None.’

“Solomon Islands WILL NOT DO ANYTHING that will undermine its own national security and jeopardise the security of any or all Forum countries.

Solomon Islands will never be used for foreign military installations or institutions of foreign countries. It is my government’s legacy to safeguard the future of Solomon Islands and its people, not to endanger the country and its citizens or the security of any Forum country,” PM Sogavare highlighted.

He however highlighted the need for Honiara and Canberra to review and update the existing 1994 Partnership Agreement between the two countries to ensure it appropriately captures current and new areas of cooperation, including the 2012 Subsidiary Agreement on APTC, and the 2017 security Agreement, a draft of which was submitted to Australia in June 2022 for consideration and further joint consultation.

He further confirms, a Memorandum of Understanding Between Solomon Islands Government and the Government of Australia relating to land exchange for the new Australian Government Chancery in Solomon Islands has been vetted by the Attorney-General’s Chambers and is now with the Ministry of Foreign Affairs and External Trade.

The key to long-term peace and security in Solomon Islands rests with our ability to address the priorities of all provinces articulated in the Townsville Peace Agreement which basically called for infrastructure development in all provinces – roads, bridges, wharves, airstrips, market outlets for products, schools, clinics, and hospitals. If the Solomon Islands government with the help of development partners was able to address these priorities for all provinces, long-term peace and security and economic development will look after itself.

Prime Minister Albanese is being assured of Prime Minister Sogavare’s commitment to work closely with him as a member of the Pacific family and a close neighbour based on trust and mutual respect.

The Australian PM is thankful and values PM Sogavare’s assurance that Australia is Solomon Islands Partner of Choice.

“Like families we won’t always agree on every single item, but what we will agree on is pursuing common interests wherever we can. Australia regards ourselves as very much wanting to be partners of choice for Solomon Islands,” PM Albanese said.

Prime Minister Sogavare also invited Prime Minister Albanese for a state visit to Solomon Islands and called for the resumption of high-level consultations between Honiara and Canberra on a more regular basis.

PM Sogavare retired from the day’s engagement at around 10pm.